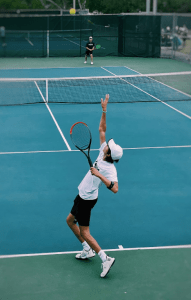 As a result of the loss at regionals, this tennis season has officially ended. Devon Clark, a player on our boys singles team, attended the regional tournament at HEB Corpus Tennis Center on Wednesday, April 13. Against Needville, Devon played hard to finish the first set 4-6 and fought hard to finish the second set 3-6. Although Devon was not able to continue, it was a tough  loss and a valuable learning experience. Upon finishing the season, Everett stated “I am very proud of each player for working hard and how much they have improved this season and I cannot wait to see how they do in future seasons.”

All of us here at PHS journalism wish the tennis team all the best for the future as we conclude this season. 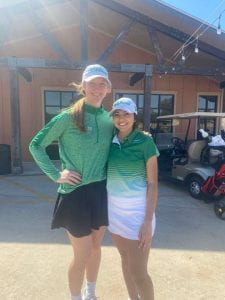 In all tournaments so far, our men’s golf team has finished within the top five. They placed second in a home tournament, first in tournaments in both Somerset and Jourdanton, as well as third in two tournaments held by Divine. There are only three players on the girls golf team this year and therefore no team awards are given. In spite of this, Sadie McAda did perform well at the SAISD tournament, finishing as the 3rd place medalist.

Recently golf team members have been working on improving their course management skills and short game to help lower overall team scores. It is during this time that Coach Guerra likes to adjust players’ swings and from there, make minor adjustments to their game that will enable players to be more successful. I had the pleasure of interviewing Coach Gurrea last week. I asked him what makes coaching this team fun and what motivates him to continue coaching. His answer was simple: “The attitude and work ethic that these golfers show everyday are what make coaching this team fun.”

Our golf team is a great example of success; we at PHS wish them the best! 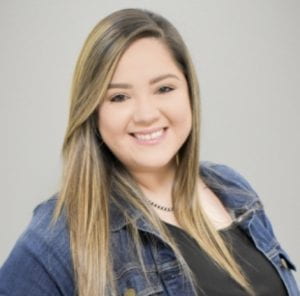 Each month, the Quill publishes a “Staff Spotlight” article to highlight and celebrate some of the talented and dedicated staff here at PHS. During February and March, The journalism staff decided to highlight Staff member Mrs. Lozano.

Mrs. Lozano is currently the Digital media and graphic specialist at Pleasanton High School. After graduating from Pleasanton High School in the year 2009, she attended Coastal Bend College to further her education. Mrs. Lozano values her personal development and chooses to surround herself with other people who are successful, such as Mrs. Moos. She and Mrs. Moos are very compatible in the work environment. They tend to collaborate which permits both of them to grow and see things from a different perspective. When asked what one good thing your boss would say about you,he responded with “I’m dependable”. She says ”The administration, staff and students at PHS have really made me feel appreciated!”This alone gives her the motivation to come to work every day and take on whatever tasks she is given. Outside of school life Mrs. Lozano loves spending time with her two beautiful daughters, Kyndall and Kaylie. As well as owning a small photography business where she gets to spend time working at sessions or editing photos.

Mrs. Lozano is a one in a million staff member. She has shown to be successful both inside and outside of school. And all of us here at Pleasanton High School are very grateful to have someone as wonderful as her working on our campus. 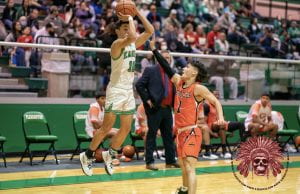 We are in the thick of basketball season, and the Pleasanton boy’s team is dominating. The results so far indicate a promising season despite a couple bumps on the way. Now it’s a straight shot to the district championships and perhaps even a state championship. It is the players, both on and off the court, who bring the energy, hyping everyone up and pushing them closer toward their goals.

Let’s talk about scores. The Eagles beat Great Hearts Northern Oaks 87-50 on Friday, December 12 at home. In the days following, on December 14, the boys were victorious over Brooks Academy, coming away with a 65-40 victory, and on that Friday they had a 71-50 victory against Uvalde, showing their depth and resilience. After a string of wins, the boys played London on Tuesday, December 29, and lost 55-64. But picked it up again on Friday, December 31 against Davenport, winning 69-43. After playing Fox Tech at home, the Eagles won 81-61 the following week. The next two games would be district games, both of which the team won by over a 10 point lead.

When asked how this season differed from previous ones, players said, “Last year I don’t think we were bad, but as a team we didn’t have time to develop and understand each other’s styles but we are definitely better than last year”. In addition, the boys basketball team continues to impress and PHS is very fortunate to have these players. The PHS journalism staff wishes them the best of luck throughout district play. 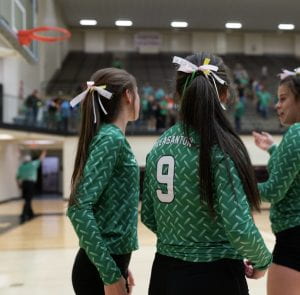 We have reached the end of the Lady Eagles volleyball season. November was a tough month for our Lady Eagles as they fought two tough battles: one against Boerne and the other against Needville.

On November 2nd, Boerne lost 3-1 in four sets due to a very tough game played by the Eagles.

In Needville’s victory over the Lady Eagles on the third of November, the season came to an end. The Lady Eagles fought hard, but Needville came out on top with a 3-1 victory.

In the opinion of head volleyball coach, Gabrile Agurrie, the girls had a great year. This year’s Lady Eagles made it all the way to the second round of the playoffs. Receiving two honorable mentions, two first teamers, and a district MVP award (Sadie McAda).

The Eagles are now working on improving their speed in off-season classes so that they can compete at a higher level with our district’s top two teams next year. When asked how he sees the future seasons unfolding, head coach Agurrie replied “It is very bright. I’m only losing three seniors this year, so we will have a lot of experience coming back next year.” .

The Lady Eagles prove to be better and better each year, improving and accomplishing more and all of us at PHS wish them the best with future seasons. 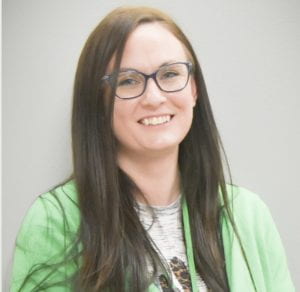 Among the many great teachers at PHS, Mrs. Glass is one of the best, teaching Principles of Health Science, Medical Terminology, and CNA (certified nursing assistant). In spite of being a nurse for years and enjoying her job, Mrs. Glass has always had a desire to become a teacher. She chose to be an educator for the same reasons she chose to be a nurse: to help people. High school is a critical time for young adults to become aware of their interests, as well as decide what they really want to do with their life. Mrs. Glass hopes to help them make the most of this time.

As a teacher, Mrs. Glass implores to cultivate a positive relationship with students within her classroom. She proves to be an attentive listener for her students saying “People too often just listen for their turn to speak. I try to pay attention to the important things people are telling me. If there is an issue that I can help with, I want to.” Apart from listening, she takes the time to support and encourage students’ efforts and successes. She understands that motivating students is more than giving prizes, but it is also acknowledging their successes and never dwelling on their failures.

Whenever possible, Mrs. Glass strives to keep up to date on both teaching and nursing practice in order to better maintain her personal development. She states “You should always be willing to challenge current practices and investigate the possibilities of making them better.”

Aside from the classroom, Mrs. Glass has a lovely family. You can always find her in the company of one of her three sons, as she enjoys being in their presence even if it’s just driving them around.

PHS is fortunate to have such a great teacher as Mrs. Glass, and we wish to thank her for all she does. 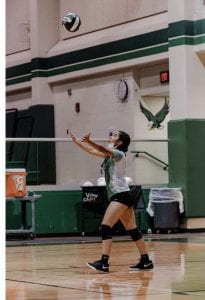 Alexis Ramos is a junior here at PHS. Her hard work, academic excellence, and leadership qualities make her a valuable member of our school. In addition to being the Junior class president, she is also the treasurer of BPA, and she qualified for state competition twice. She also plays volleyball for the JV team. According to Alexis, her favorite thing about school is the great atmosphere that all the teachers create in their classrooms and around campus. In the interview, she went on to talk about how English is her favorite subject since she has always enjoyed different kinds of literature. Coach Bird’s dual role as Alexis’s coach and teacher further showed Alexis just how innovative he is as a teacher as he always finds new creative ways to teach. When asked about her biggest influence, Alexis replied  “Mrs. Novosad because I had her in both 8th and 9th grade and I know I can count on her to help me out on anything”.

PHS is grateful to have Alexis as a student and we wish her the best!