By: Shyanne Sexton and Kassidy Vickers 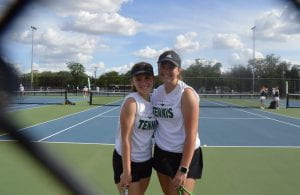 Pleasanton High School’s tennis team started off the season with a tournament against Ingram on Wednesday, August 14th. Though they fought hard, the match ended with a 3-10 loss. On August 8th Pleasanton played La Vernia on home courts, and they finished with a 2-12  loss. The following Wednesday the team traveled to Somerset ending the night with their first team win of  12-3. Starting the month of September, Pleasanton faced Navarro in a tough fight ending with a score of 4-15. Later on September 14th, the tennis team got their second big win of the season against Gonzales with a final score of 18-1.

With the start of this season, we have already seen some great athletes including sophomore, Farah Standley. We interviewed Farah and she sees the start of this season as strong and even though there have been a few losses there have been wins along with it. Her teammates are also important to her and left a great message to her fellow teammates saying, “Stay out of your head and keep going and never stop fighting because the biggest comebacks are possible if you just keep working.” This is a great mindset for all athletes, especially our tennis players as they go through their season.

We wish the Eagle tennis team the best of luck as they continue on with their season and dominate on the court.