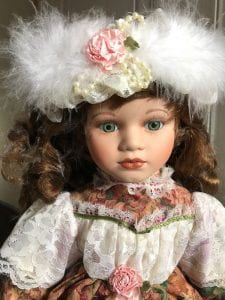 This story takes place in prime time Covid-19 during 2020, when the whole world is shut in from one another. Chloe, a victim of covid at the time, is without a doubt one of the biggest horror fans and would say 100% that Halloween was her favorite holiday. So you can imagine her disappointment when she tested positive and was forced to quarantine. Though it wasn’t as great as it usually was anyways because not many parents were letting their children trick-or-treat due to the virus.

Chloe’s story begins with her being in the early stages of quarantine, already bored out of her mind but still wanting to get into the spooky feeling that comes this time of year. What other way to do that than by watching scary movies and paranormal youtube videos? One evening, she’d stumbled upon a corny looking video on youtube about a doll from eBay that looked like it had been shot from a little girl’s basement. Chloe, who was slowly feeling sicker by the hour, was just looking for a good laugh and decided to check it out. Immediately, a porcelain doll with blonde hair and bright blue eyes filled her laptop screen. The doll spoke in an old-english accent, but even people back then would’ve told you how forced her voice was.

“Hi-ya, my name is Margie.” Followed by a toe-curling cackle, the kind you only hear in horror movies.

To which Chloe retaliated with her own laugh, thinking that whoever was on the other side of this video was trying way too hard to scare viewers. Though in her state, laughing led her to coughing, the painful kind too. Pausing the video to catch her breath and grab a glass of water from her kitchen, she returned to her laptop with a crushing feeling in her chest. Not thinking much of it because of the illness she tested positive for, she pressed play on the video again.

“Poor little you, all cooped up like an animal. Must be lonely, I know how that is.”

Now that line struck a small chord with Chloe, it was odd how specific and fitting it was to her situation of being quarantined. But nothing too unnerving, many others were also quarantined during this pandemic, it could target anyone. Letting out a chuckle at her own paranoia, she indulged in another coughing fit. Deciding her cough wasn’t going to go away anytime soon unless she acted upon it, she left the video playing and went to her medicine cabinet to grab her cough syrup. Just as she was about to take her first dose of medicine, the doll, who had remained quiet and just stared through the screen as if it was watching her, finally spoke again.

Freezing in shock, Chloe dropped the bottle of medicine, leading its contents to pour all over the counter in front of her. Now that was too specific, the chances were too slim for that to be a coincidence. Deciding she’d had enough, Chloe slid her cursor over to the top right corner and was going to close the tab when her attention shifted to the doll one last time. Finding the doll with its head tilted upward and to the right, almost as if its eyes were following Chloe’s movements, was enough for her to continue her mission of closing the tab.

Once again, Chloe froze in fear. Was it possible she was hallucinating? Was she really that sick? Margie sat silent on the screen with a wicked smirk upon her face. Allowing her eyes to scan the full screen, Chloe settled upon the account view. It was then that she felt her heart drop to her stomach, suddenly becoming nauseous. No subscribers. One view. Her view.

Certain now that things were getting too creepy, Chloe closed the tab and turned on every light in her house before going to bed that night. Sleep didn’t come easy, it’s hard when the pit in your stomach keeps telling you you’re being watched, but eventually she felt her eyelids give way. She woke up the next morning and had convinced herself that she was dreaming or Covid-19 had gotten in her head. Laughing at her panic from the night before, Chloe went about another day of quarantine.

It wasn’t until mid afternoon that day, that her doorbell rang. It was odd, she hadn’t ordered food and her friends and family knew she was sick and quarantining.

“It’s Margie, be a doll and open up the door, would ya?” The voice from the night before replied.

Chloe claims it was a rush of adrenaline and anger, thinking maybe someone was playing a prank on her, that made her open the door in a rush. Who would be cruel enough to play a trick like this on someone who’s sick? Upon seeing nobody on her porch, Chloe let out a huff and went to close the door, only a package was blocking the door from closing. Upset at her brain for playing tricks on her in broad daylight, she grabbed the box and brought it inside. She didn’t remember ordering anything recently, but maybe she’d forgotten or her mother had sent another random gift. Eager to know the answer, she ripped open the package. Only what she found wasn’t a gift. But instead the same blonde hair, the same blue eyes, and the same porcelain doll that was Margie, staring right at her. The fear could only be described by one word: paralyzing. Giving herself a while to process, Chloe once again decided this was all some big hoax and someone was probably getting a kick out of scaring her, so she walked the doll right out her front door and into her trash can.

Though, to this day she still tells herself it was all some big joke or hallucination, she still has doubts about her standpoint, and the toe-curling cackle she hears every night since then doesn’t do anything to prove her right.