Ready Player One written by Ernest Cline and released in 2011 took the world by storm, kicking off as a New York Times Bestseller. Selling 1.7 million printed copies worldwide, it garnered an outstanding review of 4.2 out of 5 according to Good Reads.

This book combined Sci-Fi and fantasy to create a breathtaking new world that refreshes the soul with incredible originality. Reading this book was definitely a fun and invigorating experience that left me wanting more and more. This book was recommended by a friend and I must say, I highly recommend this novel. It had everything you could possibly ever want in a book, it had romance, action, comedy, and so much more. For those who don’t want too much romance in a book, there was a great balance between the various other elements presented in the book that allowed the romance to not remain the core focus. However, the romantic aspects contribute to the overall effect of the novel, making you want to follow Wade and Art3mis’s love story.

The novel truly sucked you into its interactive story, for fans of the eighties, this book is definitely for you. There were numerous references to the amazing decade from, the wide selection of John Hughes movies to The Iron Giant, all the way to Back to The Future. The novel also included the classic arcade games we all know and love, such as Pac-Man, Galaga, and Donkey Kong.

Because of the raving reviews, Ready Player One was adapted for the screen, which was directed by Steven Spielberg, a highly notable director. His most popular films include, Back to The Future, Jaws, and E.T. The movie is personally not my favorite, as I don’t believe it captures the essence of the book, however it’s a good movie to watch at least once. I highly recommend this book, it’s in the PHS Library, so be sure to get a copy! 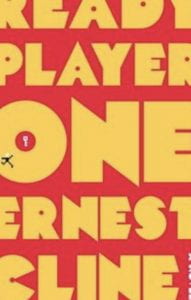