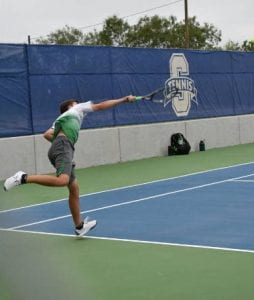 The Pleasanton Eagle Tennis team had several tournaments this month located at Somerset and East Central. On March 2nd and 3rd the team traveled to Somerset to compete in a tournament.

Devon Clark, a sophomore, says the season “… hasn’t been going as good [as] it was last year because we went to Area, but the really good people we have are seniors and we only have three seniors left.” He later added, “I’m proud that I have gotten better with my left hand… I switched hands this year… Because I tore my rotator cuff.”

The tennis team later traveled to compete in the East Central Grand Slam Tournament on the 17th and 19th returned with a 1st place win from the JV Boys Doubles main draw composed of Dillion Benavidez and Shayne Cazier. Luke Harlos and Blake Moos won 1st place boys doubles back draw for the varsity team.

Coach Schwab states, “We’re exactly where we want to be going into district we’re on a high.” He said he is most proud of, “My team.” He later added, “The team probably just needs to improve on stepping out with a tough mental attitude, stepping out with the idea that they’re gonna win, when they step out onto the court that they are the winners and that they’re gonna be the victors and we’re gonna be in great shape.”