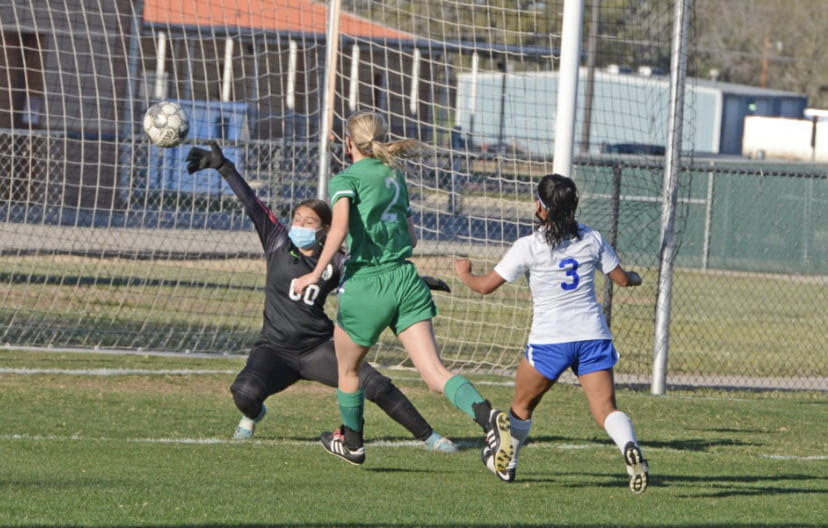 On Tuesday, February 9, both the JV and Varsity teams faced Uvalde. After a long fight, the JV tied 3-3 and unfortunately, the varsity fell, 2-0. Soon after a week of extreme weather restricting the soccer girls, they came back ready to fight. With many games being rescheduled, the varsity girls played 3 games that week. Securing a 5-0 win over Somerset, and an 8-0 win over Fox Tech, unfortunately, after a long fight with Lavernia, the Eagles fell 1-0. That same week, the JV team faced Fredericksburg and fought for a 2-1 win. Soon after, on March 3, the varsity team played YWLA and got a 7-0 win. On March 5, the Women’s teams both faced the Uvalde Coyotes. This was a game both teams had been waiting for and preparing for. After a long game the JV Eagles came out with an astonishing 5-0 win. Unfortunately, the varsity was not as fortunate and after a long fight, fell 2-0 to Uvalde. On March 18, the varsity team faced, and beat 5-0, Somerset. On March 19, the varsity team played their last district game against YWLA and won 5-0. Securing 3rd place in district. This game was also the senior night for the girls to highlight their senior players, Lacey Stevens, Zariah Garcia, Mia Hernandez, Sydney Marecka, Renata Osorio, Lyssa Ramirez, Kaitlyn Garcia, and Sofia Rivera.

This season has been a tough one for the girls, considering all of the hardships they have faced, but as a team, they have been able to overcome them! The varsity coach, Coach Bird expressed, “I hope these young ladies take the lessons of overcoming the obstacles that we faced as a group with them and use them as they move on past PHS.” Through it all, these teams have remained extremely positive and worked together to find what worked for them to work so well! “Finding a way to figure out the best way to play for this year’s team took us a little longer than usual,” Coach Bird said, “but I think we have finally found out who our true identity is and how we play best together as a group of 18 players.” Although the players are the focus of the team, the coach is just as important. Coach Bird is the coach of the varsity team, and he has a true passion for what he does. Coach Bird feels strongly that his job extends beyond the playing field, expressing, “If they are just playing soccer and leaving it at that then I don’t think I am doing my job to the fullest.” He finds great pride, and happiness in helping his players, “Watching the girls mature and come together has been fun to watch.” He said, “Being able to overcome adversity is one of the highlights of coaching young ladies.”

As the varsity girls advance to playoffs we continuously wish them luck and cheer them on. In the words of Coach Bird, “Keep playing for the girls beside you. The game is more about others than it is about you.” Good luck ladies and play hard! Pride! Pride!