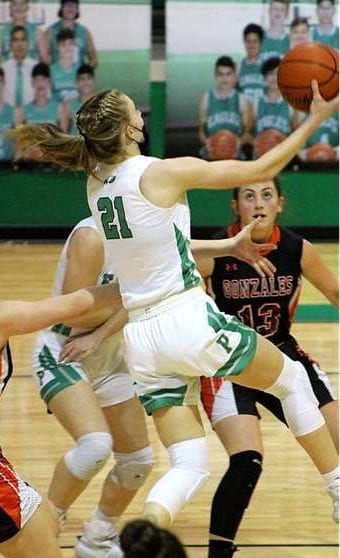 Senior, Kayli Kennedy prepares for a layup against the Gonzalez Apaches.

The Pleasanton High school girls basketball team began their second round of district this season, going head to head against La Vernia, but falling to the Lady Bears with a score of 57-29. On January 29, Navaro traveled down to face off with the Lady Eagles for the second time. After a close game, Navaro ultimately won 42-30. On February 2, the Lady Eagles traveled to play the Gonzolez Apaches to determine who would place 4th in the district to make it to the playoffs. Pleasanton triumphed, scoring 32-29. However, because the Apaches had won the first round of district against the Eagles, the teams would have to go to a pre-playoff game to determine who would make the cut. On February 5, the girls played in Lavernia and after a tough game, Gonzolez won 39-34, knocking the girls out of their shot at playoffs. We’re very proud of the fight our Lady Eagles showed us this season, packed with determination and will. We´re all looking forward to seeing what our PHS athletes have in store for us next season!