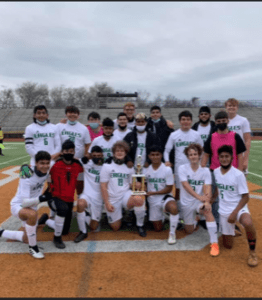 Team gathered for a photo with their trophy

The Pleasanton Highschool Mens’ soccer team has had quite the successful month in February with great performance befitting the top team in the district. So far the team goes undefeated with a record of 4 wins and 0 losses this month.
The boys played four games until the time of writing (February 23rd), winning each game. They played against the following schools: La Vernia Highschool (3-0), Poteet (unlisted), Uvalde (1-0), and Somerset (3-1). When asked about his favorite game, Coach Brieten said “The games have been fun, my favorite game this month has been our game verse LaVernia. It was an intense and well played game.”

With a strong hold on the season, the boys continue to improve their skills and teamwork. They will without a doubt continue to uphold both their position and standard for the rest of the season.