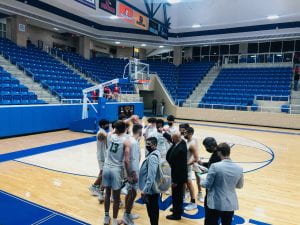 The Eagle boys during their playoff game.

The head coach of Boys’ Basketball, Coach Marquez, stated his expectations for the season is, “To do the best they can during district. To go as far as we can during the playoffs.” When asked what his favorite thing about basketball is, Coach said, “My favorite thing about basketball is the competition, to see the boys compete every single day. They push themselves to compete and play as hard as they can every single day. Whether it’s in basketball practice or during school.”

Coach Marquez commented that the end to their season was unfortunate, later adding, “The guys did a really good job. It’s one of those things you hate to see ending…” Coach Marquez went on to say, “I’m looking forward to seeing the boys play hard. For them to come out and grow as players. We strive to push them as hard as we could in sports, school, and life in general.”