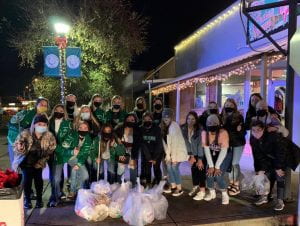 The Pleasanton Women’s Soccer team picking up trash after the Merry On Main parade for community service.

The Pleasanton Women’s Soccer program is known as one of the most competitive and tight-knit teams in our district, having claimed the title of District-Champions ten times in twenty years of soccer at PHS.

After winning the title of District-Champions for four consecutive years in a row, our Women’s Varsity Soccer team was going for the next title- Area Champions. Unfortunately due to the fallout of Covid-19, their winning streak of eight games was cut short. Many were distraught to see last years’ seniors play their last game of their highschool career, without even realizing it. “When I first heard the news of our season getting cancelled, I think I was in denial. We worked so hard, day after day, for it just to be ripped away from us. After it sank in that we’d never play with last years’ seniors again, I couldn’t help but feel defeated,” states sophomore Trinity Garcia. The Women’s Junior Varsity team also had their season cut down by one game, but was content with how well they improved throughout the season.

Although Covid-19 took away the team’s ability to train and practice together, it couldn’t take away their drive and determination to improve individually for the upcoming season. In order to stay in shape, girls were sent into quarantine with highly suggested, but not mandatory, daily workouts to partake in. “It’s all about having a good mentality,” states Coach Joseph constantly throughout the season and this rough time. This pandemic has not only taught these girls to adapt and overcome, but has also made this family’s bond even stronger. “Being able to see the chemistry we all have with each other is, to me, very inspiring and I think that from a non-soccer players point of view, it truly shows how close we all are and when we step on the field to play, nothing changes,”stated Brylee Miller, Sophomore. Tryouts were held November 31 through December 2 and teams were selected on December 3.

Varsity is scheduled to scrimmage Harlandale this Friday, December 11. Both teams are scheduled for a scrimmage against Veterans Memorial on December 15, and have an upcoming tournament in early January. The Pleasanton Women’s Soccer team is ready to get the ball back in play!