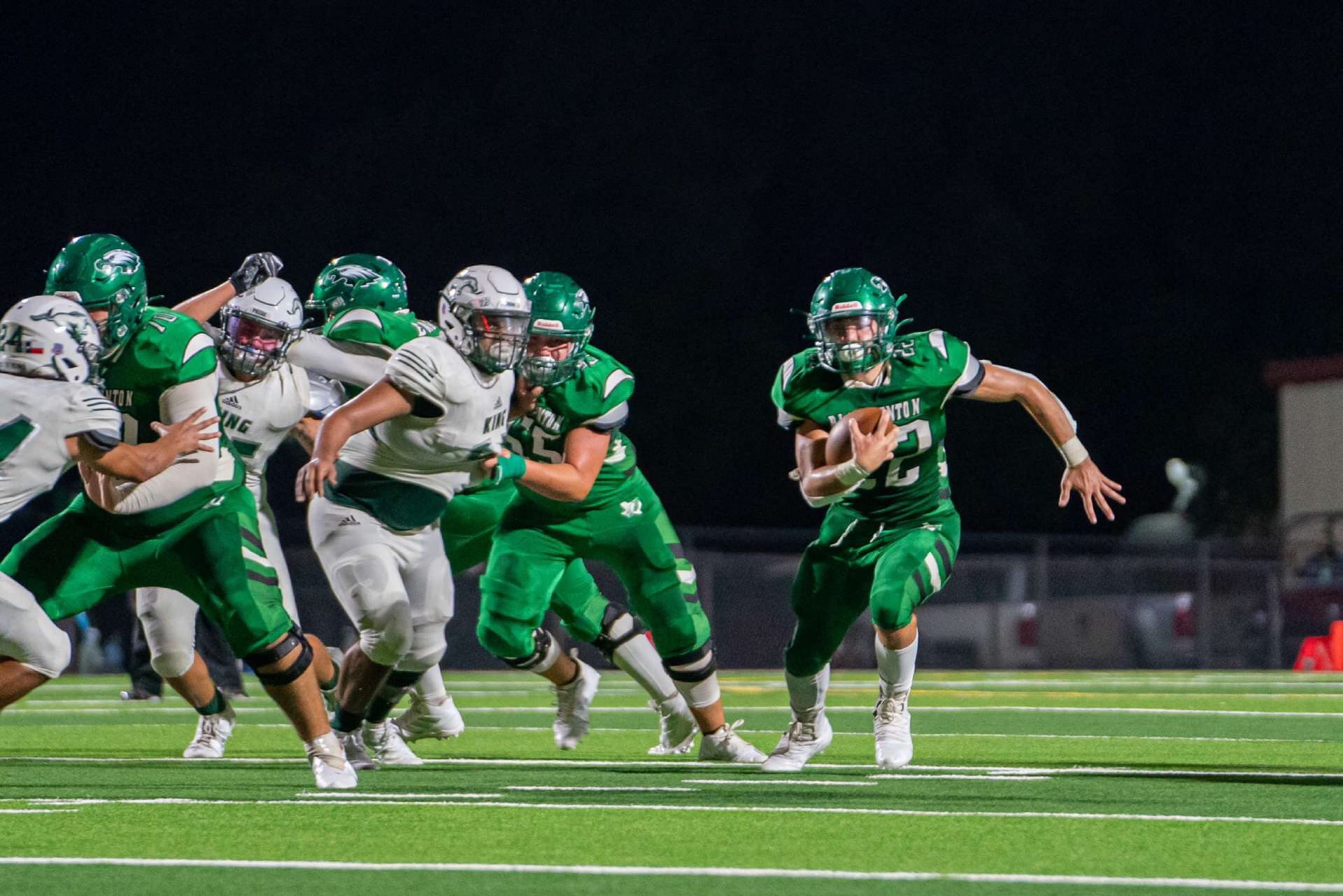 The Pleasanton Eagles varsity football team started off the season against the Hondo Owls after a two week break from football due to Covid, and only one week of practice back on Friday, August 28. The Eagles, unfortunately, were not able to keep up with the Owls, suffering a 31-0 loss. Their scheduled scrimmages were also shut down because of a Covid scare earlier in the month, which also contributed to the defeat, as said by Head Coach Liska. The boys started off rough, but by the third quarter, the Eagles began to get back in the groove of things. However, Hondo used the time of struggle to get ahead and win.

The Poteet Aggies triumphed over the Pleasanton Eagles on Friday, September 4, with a 16-3 victory. Both teams were neck and neck against each other with a tied score of 3-3, until the third quarter, when the Aggies managed to score a touchdown, making it past the Eagle defense. With a rough pass from Pleasanton finding its way into Aggie territory, Poteet managed to pull through with another touchdown to end the game. This is the first time the Aggies managed to outscore the Eagles since 2009.

Coach Liska stated, “We were flushed a couple of times, and then a couple of balls were overthrown. Timing, we’ve got to work on and got to get better at it.”

The Pleasanton Eagles fell to the Jourdanton Indians on Friday, September 18 after a rough start from the Indians. The Eagle’s sophomore quarterback Sean Ramos made their first touchdown at the beginning of the second quarter, putting them ahead, however, Jourdanton fought back with a touchdown of their own minutes later, making the score 7-6, with Pleasanton up. After half time, the Indians looked more like the team they were rumored to be, with a touchdown, a two-point conversion, and another touchdown to place them ahead 35-7 at the end of the third. The rest of the game was uneventful on both sides, with Jourdanton victorious.

The Eagles traveled to the home of the Devine Warhorses to battle on Friday, September 18. Unfortunately, Pleasanton was defeated by the Warhorses 30-7 after 4 long quarters of fighting. Coach Liska stated that the Warhorses use a lot of misdirection while running, which caught the Eagles off guard. The Warhorses scored first in the second quarter, and kept the momentum going the rest of the game, with the Eagles struggling to catch up. However, the Eagles came together during the second half, getting team chemistry back after the rust took over.  The Eagle’s lone touchdown was score by sophomore quarterback Sean Ramos.“Whenever we are together, we know what we can do,” said Ramos.

Pleasanton really played to beat the Corpus Christi King Mustangs, with senior running back Toby Garner leading the Eagles to victory. Garner had all three of Pleasanton’s touchdowns, beating the Mustangs 24-6 for the first win of the season. “We just got it done in practice and did what we had to do,” stated Toby. “It was a homecoming win, so that makes it even better. Everyone came out and played their heart out.” The Eagles certainly played out, breaking an 8 game losing streak, from 2019 to now. The Mustangs did manage to score a touchdown in the fourth quarter, putting a few points on the board, but by that time it was too late for them, crowning the Eagles victorious.

The Eagles will play Kingsville King on Friday, October 2 before their district opening against Boerne.