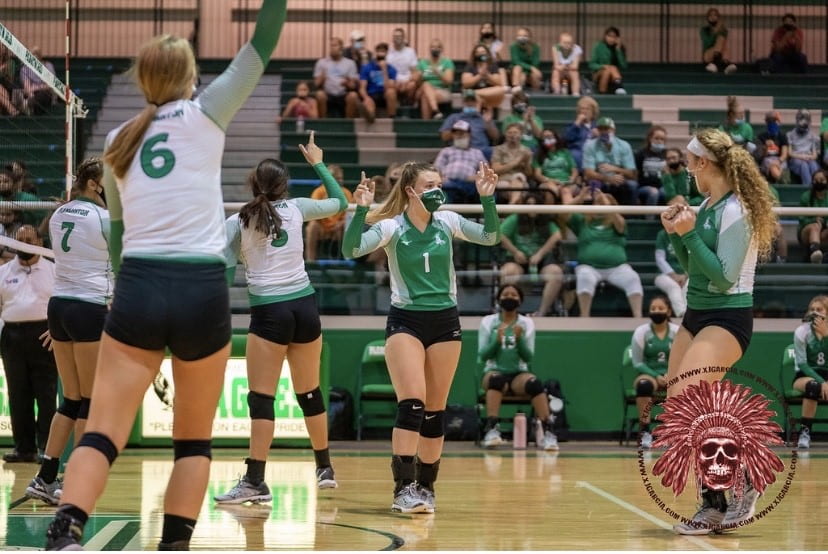 The Pleasanton Lady Eagles started the season off with seven straight wins before falling to Poth and now stand at 10 wins and 8 losses, but with district starting they will have to step it up and play even harder to make it to playoffs and hopefully be bi-district champs again.

Last year, the Lady Eagles made it to the playoffs after beating the Cuero Gobblers and had a spectacular first playoff game against Devine, by getting the win and becoming bi-district champs after 5 sensational sets. Sadly their next game ended their playoff run with a loss against the Hidalgo Pirates, but this year the Lady Eagles want to make a comeback and for that to happen they will need to work together as a team and overcome their obstacles.

Their first district game of the season was against Cuero on Tuesday, September 22 and they fought hard till the end, though unfortunately came out with a loss. The score for that game was ( 25-23, 20-25, 18-25, 20-25 ) and although they were defeated it was an exciting game to watch. JV and Freshman also lost their games, but hustled and the score was close throughout the game. When asked about how this season is going so far, Angel Tucker responded, “So far it’s been okay, but we as a team have had a habit of taking too many breaks during a game and that sometimes causes us to be defeated. We’ve had some pretty good wins but I hope we can fight for every point in our upcoming district games.” Fighting for every point will be necessary in their upcoming games so they can make it to the playoffs and be champions, but to do that they will need your support. They hope to see more fans at their future games so please show your eagle spirit and come on out to one of their games and cheer them on. Let’s go Lady Eagles!