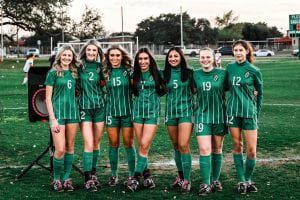 The Pleasanton Women’s Varsity soccer team played Hondo here at home on March 8, 2022. After a great game full of good plays, our girls ended the match with a winning score of 3-0. They continued into district to play Somerset on Mar 11, 2022, and brought home the win 2-1. The girls played their final district game on Mar 14, 2022, against YWLA and beat them once again with a final score of 4-1. The Eagles advanced into the first round of playoffs where they played the Palacios Sharkettes and won 3-0, advancing them to round two. In round two, the Eagles went head to head against Wimberley, a long-time rival. After losing to Wimberley in the pre-district game, our girls were determined to win and come out on top after all our hard work and improvement. Pleasanton held their ground all throughout the first half and majority of the second, but unfortunately, Wimberley scored their first goal in the final fifteen minutes of the game. Two more quickly followed, and the game ended with a score of 3-0, ending the Eagle’s season. Senior Ashlyn Vera says, “It really was a bittersweet moment, I’ve played this sport since I was little and the moment I realized this was my last game I started bawling my eyes out.” Ashlyn, along with 6 other seniors are graduating this year, but not without leaving their mark on this program. “The junior class has grown up playing this sport with the senior class, from club soccer to school soccer, they’ve made their impact on us. It’s gonna be a huge adjustment next year without them, but I’m looking forward to their bright futures and the future of this program,” said Brylee Miller, Junior. The program is sad to see such great players leaving, but they are looking forward to next year’s team and can’t wait to give it all they got next season!