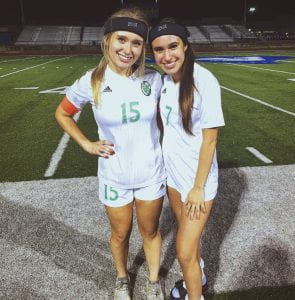 Seniors Kendall Espey and Kenley Everett after their 3-2 victory over La Vernia.

The Pleasanton Women’s Varsity soccer team started the month off with a 3-2 win against one of their biggest rivals, La Vernia, on February 1st. After tying 0-0 and losing 1-0 against them last season, it felt great for the girls to finally avenge themselves. Not too long after, on February 4th, the girls took home another win against Poteet with a final score of 8-0. After working hard at practice and going over everything they needed to, the varsity girls were ready to play another big rival, Uvalde. It was a hard-fought game, but unfortunately, the Eagles fell short 4-1. This loss only encouraged the varsity team to train harder, in hopes of beating them in March when they play each other again. The JV team took home a 2-0 win against Uvalde to start their first game of the month off great. On February 11, the varsity team traveled to Hondo ready to play and ended the game with an 8-0 win before staying to watch the Pleasanton Men’s Varsity team in their game against Hondo right after. Both the Men’s and Women’s teams enjoyed supporting each other and look forward to doing it again when both teams play Hondo in March. The Women’s JV team ensured a 7-0 win against West Campus at home on February 11th. On the 15th, both Varsity and JV played against Somerset here at home and both teams won; Varsity with a score of 3-0 and JV with a score of 5-0. On Friday the 18th, both teams went up against YWLA and won again; Varsity 4-0 and JV 5-0. On February 28th, the varsity girls traveled to SAISD to  play against Fox Tech once again and brought home an 8-0 win. The following Tuesday, March 1st, the varsity team hosted a game against Poteet here at home and won 8-0. This night was also teacher appreciation night, where each girl selected a teacher from our district that impacted them and honored them before the game. On March 4th, both teams traveled to Uvalde ready for a good game they’ve been preparing for. Due to missing many girls for the game, varsity had a new game plan in mind in order to hold their ground. Coach Bird was forced to pull his 6th string goalie and put her in the box, along with pulling two JV girls up to play in the varsity game. After a long 80 minute game, varsity fell short 3-0. The girls are still very proud of their performance, as it went much better than they could’ve expected. Both teams are looking forward to finishing the season off strong.