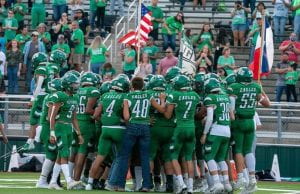 The Varsity Eagles huddle together before their game.

On August 27th, the Pleasanton Varsity Eagles played their first game of the season against Edison at home. The Eagles won with a score of 42-13 with 6 different players scoring a touchdown. Pleasanton scored 21 points in the first quarter with the help of Juan Lopez, Joel Arevalo, and Michael Castillo who all scored a touchdown. Edison scored their first touchdown in the second quarter and gained 6 points leaving the score at 21-6. In the third quarter the Edison Bears scored on another touchdown putting the score at 21-13, but Pleasanton scored right after with a touchdown by Jayden Palacios ending the quarter with a score of 28-13. In the final quarter, Jayce Krauskopf scored a touchdown and Seth Harrison followed with a touchdown as well to end the game. “I feel good and proud of everyone in the football program for the improvement/jump we made compared to last year, “quarterback Sean Ramos said. “Last year wasn’t our best year, so to see us grow as a program and team is something to be excited about.”

On September 3rd, the Eagles played Antonian College Preparatory away from home. The Eagles lost 19-17, trying their best to make a comeback in the end with little time left, but fell short. They started off the game strong and scored 10 points in the first half with a touchdown by Diego Lopez and a 35-yard field goal by Jose Angel-Perez. In the second half, Antonian scored two touchdowns in the 3rd quarter to put them in the lead 13-10 and the Eagles responded with a touchdown from JJ Morales putting the score at 17-13. With only six seconds left in the third quarter, Antonian scored the game winning touchdown. Nobody scored in the 4th quarter. “We need to work on little mistakes such as penalties and turnovers before district,” said Ramos. “We are trying to play as clean and crisp as possible and that means not letting the other team capitalize on mistakes on our end.”

On September 10th, the Eagles played in a Highway 97 rivalry game against Jourdanton. The stands were packed and the pressure was on for both teams. In the first quarter, Pleasanton scored their first touchdown of the night with the help of Palacios. Jourdanton answered, gaining 6 points at the start of the second quarter. Palacios scored another touchdown and Arevalo scored right after to make the score 21-6. Jourdanton added 6 points close to the end of the second quarter and Pleasanton responded with a touchdown by Henrichson to end the first half. The third quarter only had one touchdown from Castillo to put the score at 35-12. Early in the fourth quarter the Indians scored a touchdown and went for another but were unsuccessful. Pleasanton then scored their last touchdown of the night with the help of Krauskopf. With eleven seconds left Jourdanton scored their final touchdown to end the game with a score of 42-26 and a  big win for Pleasanton.

On September 17th, Pleasanton played against Devine at home and came out with a victory and score of 35-12. Devine took the lead 6-0, but the Eagles answered, scoring 21 points in the first half. Devine scored again in the third quarter, but Pleasanton shut them down by scoring twice in the 4th quarter. ”As we enter the midway part of our season and with district start in 2 weeks, I am pleased with the overall team’s records at this time: freshman 3-2, JV 3-2, and the Varsity is currently 3-1,” Coach Liska said. “As for the Varsity, I am very pleased with the growth of several individuals and our team as a whole. I really like the direction this team is headed.” Pleasanton only has a couple games left, including their homecoming game on October 1st, before district starts. If you can, try to go and cheer on your Varsity Eagles at their next game, which is homecoming, and show your eagle spirit. Pride Pride!