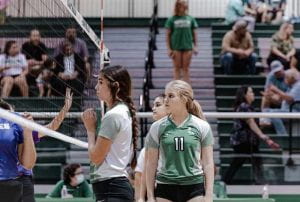 Despite the fact that the Lady Eagles are just beginning their season, scores from Varsity, JV and freshman are making for a very promising season. The Lady Eagles faced Uvalde High School at the start of the month. The varsity team, with a strong three-set win, set the tone well for the matches to come and the junior varsity team, with a 2-0 triumph, showed its true colors.

On September 7th, the Varsity, Junior Varsity and freshman teams would play YWLA High School. As each team won its respective match, these games showed to be worthwhile.

Later in the week, the Lady Eagles won another three-set victory at Holy Cross high school, kicking off a winning streak. However, this tone was not carried over to the Junior Varsity team, which lost to Holy Cross in two sets.

JV and freshman teams dominated against Carrizo Springs on the seventeenth. Both pulling strong wins and setting the stage for varsity. On the very next night, the varsity team played an exceptional match against Carrizo Springs High School, remaining focused all the way, and ending the night second to none with a three set win.

In the final stages of September, the team played Brackenridge High School. After winning two very good sets, Varsity swept the other ending with a 3-0 win. JV and freshman also won 2-0, following suit with the Varsity team.

In addition to the scores, the players have also proved that the season has been and will continue to be great. Kiley Wiechring, a varsity player, has a confident view of the season. She says “I think district games are going really well, we’ve put in a lot of time and effort to get a good spot in district” and says Coach Aguirre has made changes this year so the team can accomplish extraordinary things. In addition, she said that she really looks up to Tess and Sadie on the team for the fact that they both have great leadership qualities and encourage her to do her best.

The Lady Eagles truly embody Eagle Pride. Their season has been great, and we wish them continued success in future matches as they continue to represent the school well. Pride! Pride!