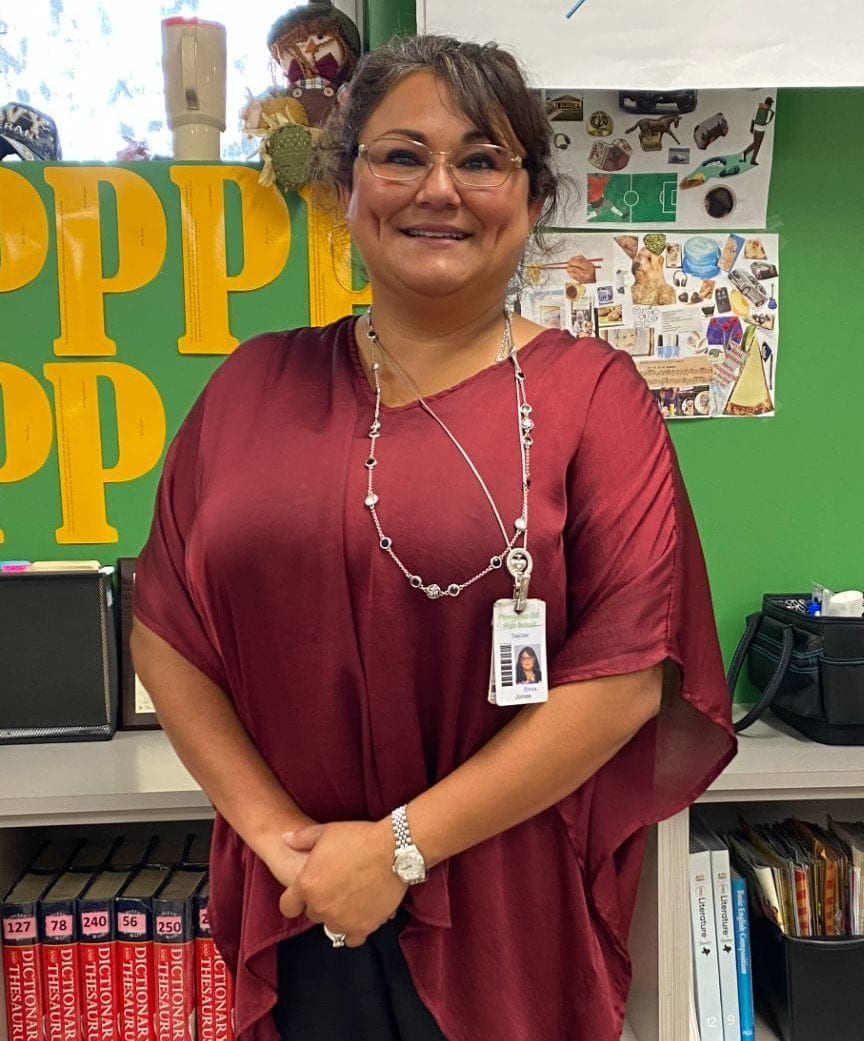 Mrs. Jones flashes her bright smile for the camera.

Many seniors may recognize Mrs. Jones as the bright-eyed, high-spirited teacher located at the end of the senior hallway. Though her well-composed image is unmistakable, most students do not get the privilege of working with Mrs. Jones. Still, she has a huge impact on those who do get the privilege of working with her, and her work around our campus does not go unnoticed.

Mrs. Jones is part of the English department here at PHS. Her job is targeted towards helping students who need practice with specific skills and strategies to be successful on their English I or II tests, seniors who struggle to master a second STAAR test, and those who have large gaps in reading. As an interventionist, Mrs. Jones has had the ability to see the growth of her students and has a great impact on their experiences here at PHS.

Before she became a teacher here at PHS or even attended college, Mrs. Jones spent time in the Navy and although her enlistment was not planned, she enjoyed the experience which she believes saved her life. On a walk to her job at HEB, she explained that she was “feeling sorry for [herself].” “I was thinking ‘Oh my God, what am I going to do with the rest of my life’… you have this thought of ‘… am I going to be stuck here forever,’” Mrs. Jones explained.

She questioned how she would make it out and buy a house or start a family. But this fateful day, her friends drove by, explained that they were on their way to join the military, and asked if she wanted to join. “They took me right back to my home, I called in sick, left with them and we went to San Antonio.”

After a while, Mrs. Jones was processed and sworn into the Navy. “When I came out, it was already dark, already late and they were like ‘what took you so long?’ and I said ‘what do you mean? I just got sworn in.’ and their mouths dropped wide open… None of them joined that day.”

Mrs. Jones left for the Navy the week following her enlistment, and explains it was the “beginning of [her] today.” Mrs. Jones strongly believes that that day was meant for her. She was at a point in life where she felt stuck, with no idea of where she was going, but the opportunity provided a “vehicle” for her passage to the life she lives today. She explains, “It was one of the best choices I made in my life.”

After her time in the Navy, she became an Atascosa Jailer, then went on to become President of the police academy that she attended. Mrs. Jones decided to leave the position after the ambush on Atascosa county and returned to school, beginning in Palo Alto, then transferring to Texas A&M.

Mrs. Jones, through her service for the country and the students of PHS, has proven to be a caring, strong, and passionate woman that deserves to be recognized. Thank you, Mrs. Jones, for your dedication, hard work, and all that you do for our campus. Pride Pride!