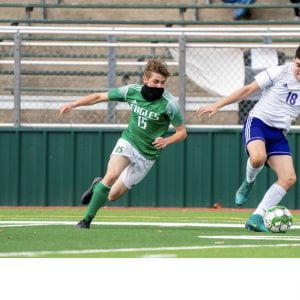 Timothy Klein hustling for the ball

Timothy Klein is a sophomore here at PHS, who before coming to Pleasanton, went to school at Wellsprings in RAK, United Arab Emirates. Timothy is a kind and responsible student who tries to help out his fellow classmates whenever he can. Timothy enjoys all of his classes, but his favorite subject is Math. When asked what his favorite part about school is, Timothy responded, “I enjoy being around other students and getting to know them.”

He is not only a smart and overachieving student, but he also plays for the Pleasanton Men’s Varsity Soccer team and runs cross country. When he’s not in the classroom, he is playing his heart out on the field. This year, the men’s soccer team came out on top as undefeated district champs and made it to playoffs where they became bi-district champs and area qualifiers.

Timothy was also chosen by Mrs. Minniear as the next recipient of the PHS Positivity Challenge. “Timothy has such a genuine smile and fantastic attitude!” she expressed, “He is polite and kind and has a positive influence on those around him.” Timothy is one of the most kind and caring students you will meet at PHS, and that is why he is this month’s student spotlight!