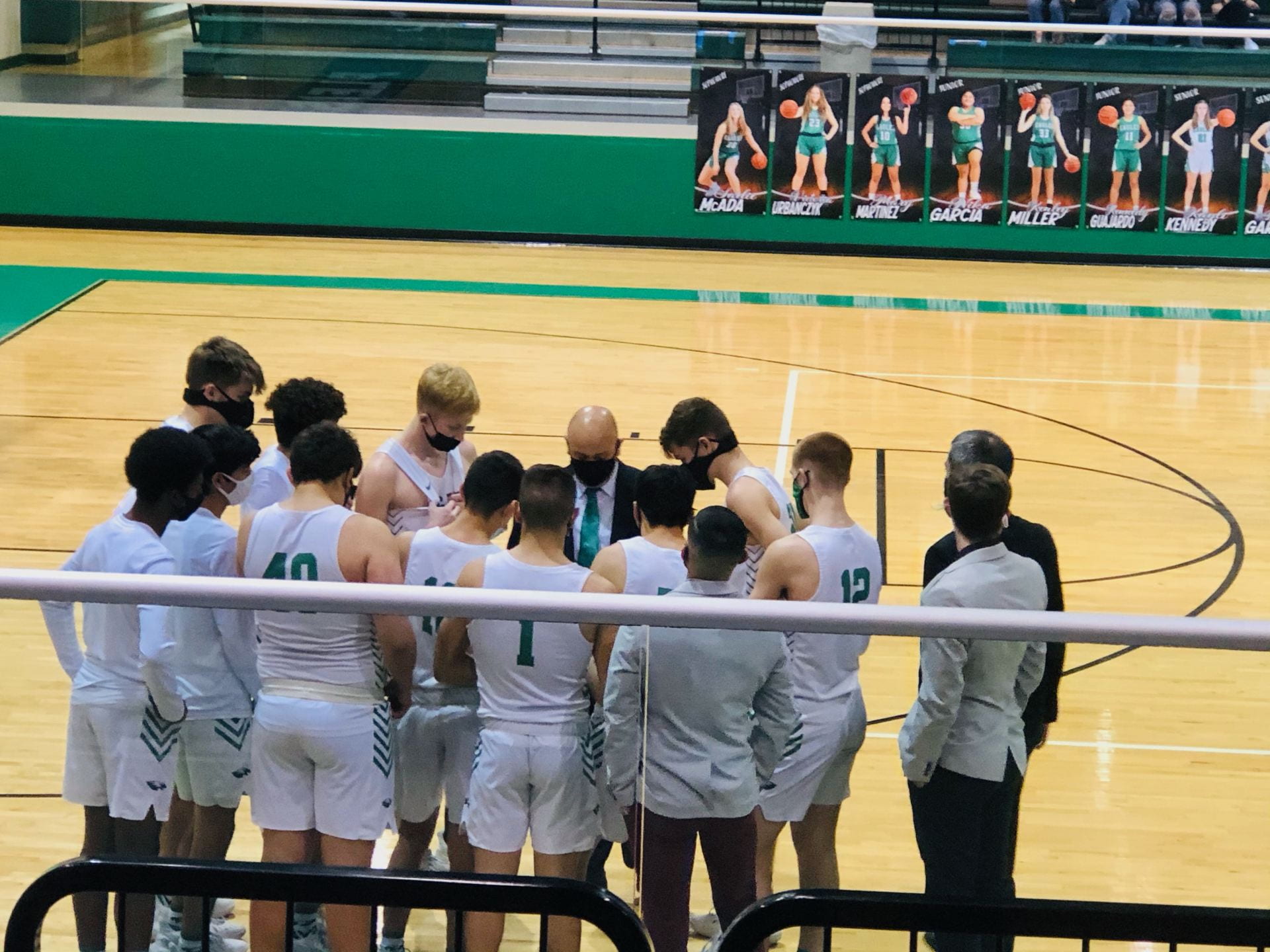 The Eagles huddle before their first district game against Navarro.

The Eagles Boys’ Basketball team has been busy over the Winter Break with different games at least twice a week. On December 11, the Pleasanton Eagles faced the Luling Eagles and beat them in a close game. The final score was 87-43 with sophomore RJ Marquez being a top scorer for Pleasanton with 24 points along with fellow sophomore Layne Dowdy and junior Juan Lopez contributing 12 points each along with junior Reagan Moore’s 10. December 15 brought another win for the Eagles against Uvalde Coyotes, beating the Coyotes 79-62. “ We’re using this time to get ready for district,”  said head coach Coach Marquez. The boys kept a close game against the Beeville Trojans on December 18, but beat them out in the fourth quarter 56-69. Unfortunately, December 19 brought a loss for Pleasanton against the Southwest Dragons. A tight game with a final score of 51-49, the Eagles were led by RJ Marquez with 15 points and Layne Dowdy with 10. On December 21, the Pleasanton Eagles traveled to New Braunfels to play the Unicorns. Sadly, Pleasanton fell to the New Braunfels Unicorns with a final score of 81-35. The top scorer was RJ Marquez with 9 points. San Antonio Christian traveled down to the Eagle’s Nest to play on December 30. The Eagles lost to SAC as well with a score of 55-70. Sophomore Jake Casias was the leading scorer with 20 points along with assistance from RJ Marquez and Layne Dowdy who each had 10.

The new 2021 year started off well for the Eagles who played Davenport on January 2 and won. Top scorers included RJ Marquez with 16 points and Estevan Jackson with 13, both contributing greatly to the 72-53 win. The good year continued on to the next game against Fox Tech on the fifth of January. The victory was due to the help of lead scorers Layne Dowdy with 16 and RJ Marquez with 12. The Eagles defeated the Buffaloes 74-47. Brooks Academy came down to Pleasanton on January 8 and defeated the Eagles 69-61. District began for the Eagles on January 16 against the Navarro Panthers where the boys picked up a win 60-52. Top scorers included RJ Marquez with 21 points and JD Guerra with 14. The Eagles then traveled to Gonzales to defeat the Apaches 68-38. Again, top scorers were sophomores RJ Marquez with 22 and JD Guerra with 14 points.