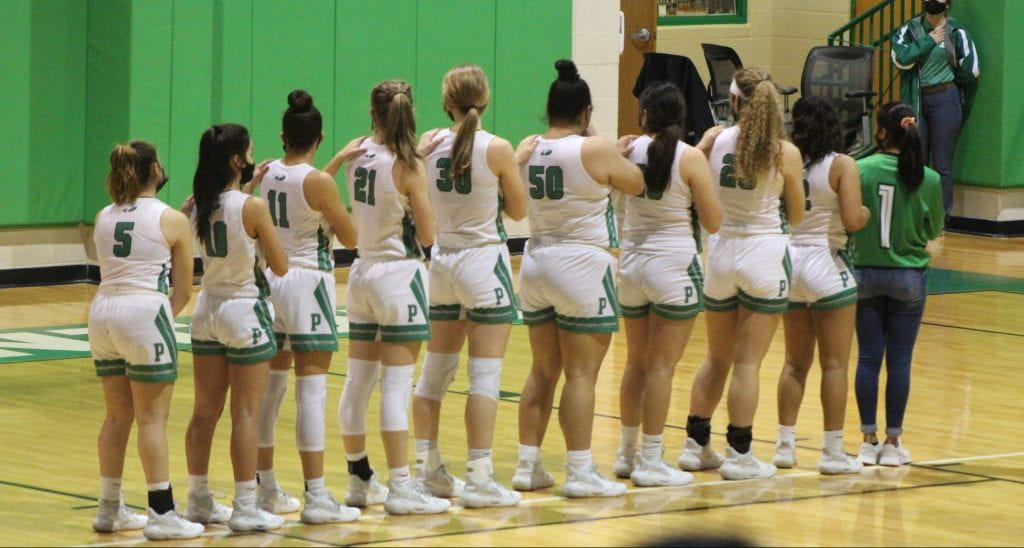 The Varsity team lines up for the National Anthem before playing.

As we continue to face insane things, the girl’s basketball team perseveres through it all. Playing through winter break and into the new year, we continue to be amazed and proud of the girls.

Although this season hasn’t gone completely as anticipated, head coach, Coach Rentfro, is still very proud of the teams. Facing Covid-19 regulations and a tough region, the Eagles have done amazing things. “It’s been a wild season due to Covid. It’s been a real test to our patience and adaptability.” states Coach Rentfro. While this year has been very different, Coach Rentfro is still able to find the good in the season, stating, “My favorite part of the season has been seeing the team give everything they got game in and game out. It’s been great to have so many girls step up in different ways to help the team.” Through the hardships of this season, the girls continue to improve, “The team has definitely let the game slow down and not rush possessions.” states Coach Rentfro. “We are making reads more quickly and trusting their abilities.” As the season continues on, the team and Coach Rentfro remain very optimistic about the season, when asked about the furthering season Coach Rentfro says, “I look forward to competing in our district and ending our playoff drought. We have one of the tougher districts in Region 4 4A, with all our opponents currently being ranked or at some point this season. Iron sharpens iron, so facing tough competition can be a great opportunity to get better.”

As the season progresses and the Eagles advance further, they will continue to fight hard. As stated by Coach Rentfro, “None of this is guaranteed, especially this year, and any chance to be on the court is a gift.” Good job on your season so far and good luck in the games to come. And remember ladies, in the words of Coach Rentfro “You’re lucky to play basketball today, and I’m lucky to coach you.” Pride! Pride!