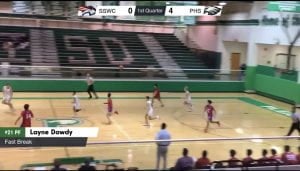 The month of November marked the start of the Boy’s Basketball season! To start off the season, we got to get commentary from Coach Mills! He has high hopes for the season, predicting that the Eagles will go undefeated in district, while watching out for Juan Lopez, Jace McCauley, and J.D. “Dawg” Marquez! He did mention that the team needs to work on rebounds, but he is confident that they can overcome this small bump!

Moving on to scores, on the 9th of November, The JV and the Varsity teams had a few scrimmages, with the Varsity winning the first 60-6 and the second 45-25, while JV finished the first 30-26 and the second 48-10! On the 13th, the Eagles traveled to compete against Jones, with a 83-48 win for the Varsity. On the 18th, the Eagles faced off against the Wildcats, and Varsity unfortunately lost 55-64, and the following day, the Eagles played Edison, and the Varsity won 61-45. The 20th pitted the Eagles against the Southwest Dragons, and Varsity won with 79-59. The 23rd pitted the Eagles against Young Men’s Leadership Academy, Varsity won a close game of 66-61. To finish off their starting month, The Eagles played Carrizo Springs, blowing them away with 78-48. The Eagles played two teams on the 2nd of December, Varsity beating Martin 63-43 but barely losing to Cedar Park 42-43. The next day, they played Clemens, losing 46-68 and they also lost to Somerset, 51-54 in Overtime. To end their three day spree, they played Harlington South, and unfortunately lost 60-50. They played South San Antonio West on the 6th, which resulted in a Varsity destroying San Antonio 88-26. Their current record stands at 9-5, and they play Northern Oak on the 10th. Unfortunately, I failed to obtain a majority of the JV scores, and I deeply apologize for the failure. Nevertheless, Good Luck Eagles!