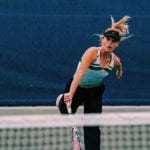 The Pleasanton tennis season has once again begun! There have only been three tournaments since the spring season started, but there have been great outcomes so far. On Friday, January 15, 2021, they had their first tournament of the spring season. It was the East Central Winter Classic tournament at East Central High School. The team had been practicing everyday for this tournament and it paid off. Elly Hernandez and Bennack Conroy received first place in varsity mixed doubles. Luke Harlos and Blake Moose also received first place in varsity boys doubles back draw. On Friday, January 29, 2021, they participated in the tournament, Dogfight in River City. Elly Hernandez and Bennack Conroy got first place in varsity mixed doubles. Makenzie Richter and Evelynn Caraway got a trophy for girls doubles. Coach Schwab said, “All the players were playing in every division boys and girls but only came back with two trophies.” The third tournament was on Tuesday, February 9, 2021; the tournament was the Southwest Dragon Tournament in Southwest. Blake Moose and Luke Harlos won first place boys doubles in the main draw. Cian Martinez and Gage Pawelek won second place boys doubles in the main draw. Elly Hernandez and Bennack Conroy won first place mixed doubles in the back draw. Josh Schmahl and Illianna Solorzano won second place mixed doubles in the back draw. Cade Macmanus won first place boys singles in the back draw.

When Coach Schwab was asked if he had any encouraging words to his players, he said, “Every time you step out on that court, you should be there to win; there should be no reason why you can’t win a game with the talents that you have when you step out on that court. It’s all you; you take to the court. … It’s what’s between your skills and your hearts; you should be able to win every game, and there is no doubt in my mind with that. One of our mottos is, ‘Respect all, fear no one.’”

Elly Hernandez was also asked if she had any encouraging words for her teammates. She said, “Do your best and don’t give up because you never know the outcome of the game. Win, go through the match until it’s over ‘cause you can always pull through and get the W[in].”

This spring season has been a challenge for all the tennis players. Due to Covid, there are a lot of restrictions while at the tennis tournaments. Elly had a lot to say about the Covid restrictions. She said, “Covid kinda sucks, because at tournaments we all got to walk around to like other teams we know, and we got to hang out with our friends from other schools who play tennis also. There were normal concession stands that we could buy from, but we can’t do any of that anymore due to Covid. Also playing with the masks is pretty difficult too, it’s hard to breathe.” The tennis players push through the hard restrictions and fight to play a great game.