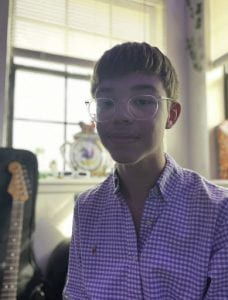 In this issue’s student spotlight, we are featuring Devin Derby! Devin is a sophomore, and is usually seen spending time with his friends, laughing and joking around. We got the chance to interview him, and we asked him a multitude of questions.

We asked him what he loves most about high school, and he responded, “I think my favorite aspect of school is the people and the experience. It’s a nice place to be at.” When questioned about his favorite experience, he said that his answer was the same. We followed up by asking him what his favorite subject was, and he responded that it was English. When asked to elaborate, he continued with “I like the discussions we have over it.” He gave thanks to his former English teacher, Mrs. Meagan Novosad, stating that “She always gave me really good feedback for all my essays and what not I’d do.” Devin joined BPA this year, and is excited about all the opportunities it’ll bring him. In the years to come, he hopes to become an officer, stating that any role would work for him. Devin isn’t involved in any sports, but he talked about his plans to join the golf team.

We had the opportunity to ask Coach Everett about Devin in the classroom, and he stated “Devin is a hard worker, very bright and is very familiar with the content. He’s funny, and likes to make jokes, but he remains respectful towards me, and is always in class.” Devin is an ambitious student with his sights set on the stars, and we’re so glad he was chosen for this month’s student spotlight! Good luck with your classes, Devin!