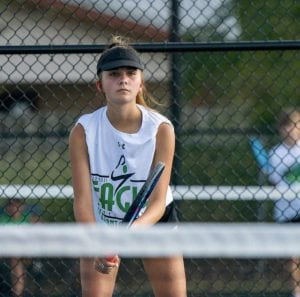 In early September, the Pleasanton Eagle tennis team opened district with a strong win over Karnes City. With a final score of Pleasanton 14, Karnes City 5, some come from behind wins were extremely rewarding for the Eagles. Soon after, the tennis team dominated against Gonzales. With a 10-0 win putting them 2-0 in district. Yet again, a few days later, Pleasanton had another dominating game against Somerset high school. Beating them 10-3, securing their 3rd district win.

Freshman Lauren Miles has been playing tennis for many years and continues to play with the Pleasanton High School. She loves the team and just how supportive everyone is of each other. Saying “everyone is cheering you on” no matter what. For first year coach Everett, the season has been exciting. “So far we are having an awesome time and are doing so well,” as the season continues Coach Everett is confident in the teams spot in playoffs and looks forward to facing the tougher competition in district. Aside from this, Coach Everett looks forward to getting to know his team even better, saying he wants to “connect with the kids more on a personal level.”

As the season continues marching on, the Eagle tennis team will continue to do amazing. We wish you luck, Eagles! Pride! Pride!