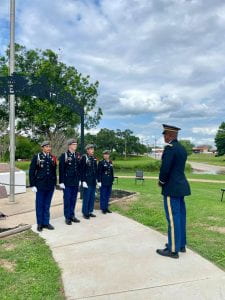 As the school year comes to an end, so do the clubs and organizations within our district. After Covid-19 took their chance of an End of Year Award Ceremony and Change of Command Ceremony last year, Pleasanton JROTC was excited to be able to participate in this event on May 20th . The Change of Command Ceremony is significant because it’s a change of authority of Cadet Senior Leadership. Announced at this event was next year’s new Battalion Commander, Simon Karsky (Junior), and Battalion Command Sergeant Major, Hayli Woodson (Sophomore). On May 22nd, JROTC participated in the Alpha Warrior Challenge at Retama Park in San Antonio. After practicing and training for this event the previous weekend, our Eagles were ready to dominate the hour and 45 minute course. They were split up into an 8 person male team and an 8 person female team. The Eagles won 4th place out of the 12 teams in the male category, and the Pink Eagles won 2nd place. Pleasanton High School JROTC was very honored to participate in the Pleasanton City Wide Memorial Day Ceremony to pay their respects to our fallen heroes this past weekend. They participated in a wreath laying ceremony at the Veteran Memorial early Sunday morning. Over the summer, 10 cadets were chosen to participate in the JROTC Cadet Leadership Challenge. The 5 male cadets chosen are: Lorenzo Samaniego, Aries Uhl, Logan Alexander,  Valdamore Herrera, and Kenneth Alegria. The 5 female cadets chosen are: Natalia Jones, Alaina Nethken, Courtney Cearley, Annie Araiza, and Hayli Woodson. It’s a 4 day overnight event that focuses on team building and cadet leadership. Colonel Wynder has done a great job with this year’s JROTC program and is beyond proud of the graduating seniors. “I want them to take the lessons they’ve learned during this experience and apply them for the rest of their lives, motivate young people, set up for success, live by the cadet creed, and always be successful.” Good luck to those graduating, and we’re looking forward to what JROTC has in store for next year!