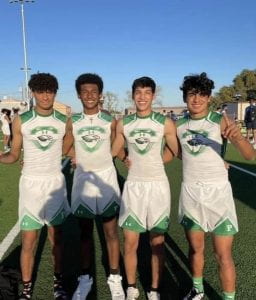 The Varsity Boys and Girls track teams competed in the 4A Area Track Meet on Thursday, April 15th in Wimberly, TX. The Lady Eagles placed 11th with 9 points in total. Even with weather changes throughout the day, both teams worked hard and pushed through.  In the field events, Ciarah Garcia placed 6th in triple jump and Victoria Castillo placed 6th in the high jump. On the track, Kassidy Vickers placed 6th in the 3200 M run and the 1600 M run, while Jilllian Barcomb placed 6th in the 300 M hurdles. The 4 x 100 M relay team of Emree Adamitz, Kiley Wiechring, Brandi Barnett, and Marissa Rothenbach placed 7th and the 4 x 200 M relay team of  Diamond Brownlee, Kiley Wiechring, Victoria Castillo, and Angel Tucker placed 8th. Caitlyn Neischwitz was the only athlete who advanced to the Regional lV Meet for the Lady Eagles.

The Varsity Boys placed 3rd with 91 points in total. Before the weather became cold and drizzly, the field events took place and competing was sophomore Sean Ramos who finished 8th in long jump, junior Juan Lopez who finished 4th in long jump and 8th in triple jump, junior Este’van Jackson who finished 3rd in triple jump and 5th in long jump, and freshman Preston Pilgrim who finished 3rd in pole vault. For the running events, the 4 x 100 M relay team of junior Rudy Franco Jr, Sean Ramos, Juan Lopez, and Este’van Jackson finished 5th but only by .03 seconds and sadly missed their chance at qualifying for regionals. Sophomore Averee Cantu, junior Reagan Moore, and freshman Jayden Palacios ran the 800M and finished 6th, 7th, and 2nd. Junior Justin Veale ran the 110M hurdles and finished 5th and also ran the 300M hurdles and finished 7th. Senior Ashon Thompson flying past his competitors placed 1st in the 100M dash and 200M dash and Jayden Palacios also placed 1st, but in the 400M dash. The 4 x 200M relay team of Este’van Jackson, Sean Ramos, Juan Lopez, and Ashon Thompson finished 2nd after a tough race and the 4 x 400 M relay team was the last race of the night and consisted of Sean Ramos, Juan Lopez, Este’van Jackson, anchored by Jayden Palacios who placed 3rd with a time of 3:28.24 seconds and barely missed breaking another school record. Six athletes advanced to the Regional IV Meet for the Eagles.

The Texas 4A Regional IV track meet took place at Javelina Stadium in Kingsville on April 23rd and 24th. Senior Caitlyn Nieschwitz finished 10th with a time of 2:39.21 in the 800M run. Caitlyn has accomplished so much in her 4 years of track & field for the Lady Eagles and the whole community is proud of her. The Varsity Boys placed 2nd at the regional meet and had a total of 62 points. Este’van Jackson placed 9th in triple jump and Juan Lopez placed 7th in long jump, both narrowly missed getting into the finals.  Preston Pilgrim was the first athlete to earn a spot at the state meet with a 2nd place finish in pole vault. Jayden Palacios ran the 400M dash finishing 1st with a new school record and ran the 800M run with a 3rd place finish.  Ashon Thompson placed 1st in the 100M dash and remained undefeated and also ran the 200M dash and finished 2nd. The 4 x 200M relay was unfortunately disqualified on a rules infraction and did not earn any points. The 4 x 400M relay team placed 1st and broke the prior school record time (3:27) set 46 years ago. They broke the record with a time of 3:23.507 and then broke their own record on Friday with a time of 3:28.482. “The best moment was watching our 4×4 team break the school record in prelims at regionals and then the next day break it again and beat Wimberly who was talking trash to our guys,” said Rudy Franco Jr. The Eagles didn’t let the trash-talking phase them and instead they settled it on the track. Their hard work paid off and the team met their biggest goal which was making it to the state championship.

The UIL State Track and Field Meet was held at Mike A. Myers Stadium on the UT campus in Austin, Texas. First up for the Eagles was Preston Pilgrim who scored the first points for the team and set a new personal record when he cleared 14’-6”. Next up was senior Ashon Thompson who ran against tough competition and placed 4th in the 100M dash with a time of 10.56 and also competed in the 200M dash and placed 4th scoring points for the eagles in both events. Jayden Palacios was now up to run the 400M dash and gave it all he got to place 3rd breaking his own school record time of 21.84 seconds and winning the bronze medal. The final race for the eagles was the 4 x 400M relay team of Sean Ramos, Juan Lopez, Estevan Jackson, and Jayden Palacios. They were competing against some of the best relay teams in Texas, but that didn’t phase them at all. Ramos started the race with a great first leg and handed it off to Lopez who kept the eagles in the mix. Estevan Jackson had an amazing leg as well and to finish it was Palacios who took off for the finish line and finished in 4th place breaking the school record with a time of 3:21.51 and scoring points as well for the team. The Varsity Boys represented the school and community proudly and placed 5th with 24 points at the meet. “The way I felt about this track season is a feeling that can not be described, it was like a movie,” stated Rudy Franco Jr. For Ashon Thompson this is his last year competing for Pleasanton, but he has made his team, school, and community proud and has shown the underclassmen how it’s done. The future is very bright for the eagles and the team and coaching staff and very excited and looking forward to next year. Congratulations to the Pleasanton Track and Field teams for all their hard work and dedication. Pride Pride!