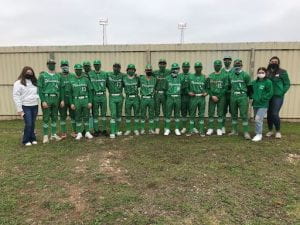 Tryouts for the mighty Eagle Baseball team were held on the 22nd and 23rd of January. In total, 30 team members made the team, 15 on JV and 15 on Varsity. They kicked off the season strong by hosting a 13 hour practice on January 30th. Soon after, both teams competed in their first scrimmage of the season that took place on February 6th against Sinton High School and Brackenridge High School. The team is very hopeful for a great season and plans on making it last. On February 23, the Pleasanton Eagles traveled to McCollum High School and faced the McCollum Cowboys for their very first game of the season. After a long fight, the varsity Eagles pulled through with an 8-5 win.

“This season I’m really excited… because our team has improved this year and we’ve learned a lot.” said senior Roman Cuevas. Coach Standley commented on his predictions that he has this year saying, ”They’re really bonding right now and they want to be great…we have a great senior leadership and they will lead us to our goal for district championship.” We can all agree that this years’ baseball team has high hopes and is determined to hit some home runs. Pride! Pride! Eagle Pride!