Did you know that for every 1,000 births, only 32 are twins? Well, here at PHS we have a whopping six sets of twins. Summer and Autumn Webster (freshman), Ayden and Andrew Parker (sophomores), Jaclyn and Jonathan Gonzales (sophomores), Logan and Mitchell Alexander (sophomores), Kelly and Kristina Mertz (juniors), and Reagan and Ryan Moore (juniors). 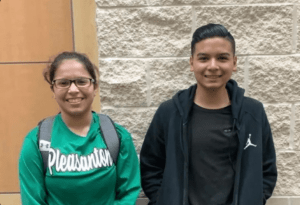 There are many highs and lows to being a twin, and all twins have different opinions on what it really means to be a twin. Sophomore Jonathan Gonzales states, “The perks of having a twin, is that you’re never alone and you always have someone to talk to.” Jaclyn Gonzales added, “He always makes me laugh when I am not in a good mood.” They both fight around two or three times a week and have twins on both sides of the family. When asked if they wished they weren’t twins, both replied “No” and “No never.” Jaclyn said, “I can tell by his facial expressions when something is wrong… You’re never alone and they are there for you when you need them the most.” Jonathan concluded with, “The best thing about my sister is that she is my best friend and that she can turn anything from a positive into a negative.”

Summer and Autumn Webster are surprisingly fraternal twins. Summer, a freshman said, “For us two, 90% of the time we have the same interests, so we can talk about lots of things… since you’re  often close to each other, you also have someone who can accompany you when you’re lonely.” Autumn added, “The best part about Summer, is that she’s very interesting. She likes what I like, she listens to me with patience and understanding and… she’s generally a very likeable and cool person.” When asked if their parents could tell them apart, Summer responded with, “ Mostly, our mom can tell us apart via our voices, but she does get us mixed up sometimes.” Autumn later contributed, “We don’t argue that much I’d say maybe a few times a week but most of the time they’re small and petty quarrels and usually get resolved fast.” Both of them said that they would never want to change being a twin.

Logan and Mitchell Alexander are currently sophomores this year and are fraternal twins, with Logan being the oldest. Mitchell said he is, “Not sure” about what the perks are of being a twin, while Logan said, “You have someone to go talk to if you need something and someone to look up to.” When asked what the best part about each other was, Logan said, “He’s kind, when he wants to be at least, and he’s understanding.” and Mitchell added, “He doesn’t annoy me.” Both brothers said they don’t argue very much, and they have a set of twin girl cousins. Logan said he would, “never change [being a twin] for anything.”

Ayden and Andrew Parker are also sophomores this year, and are fraternal twins. Ayden said the perks of being a twin are, “Fighting, having the same birthday, being minutes older than each other, being competitive with each other, and arguing all the time.” He said if he had the choice he would change being a twin and the best part about Andrew is that “He’s annoying, he’s funny sometimes, and he’s a couple centimeters taller than me, he’s smaller than me.” Ayden added that he and his brother argue “like three times a week.” He later said, “Sometimes we will say the same thing at the same time.” 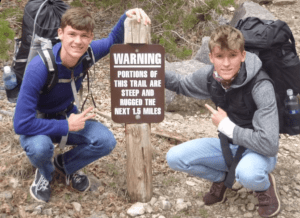 Most students are familiar with juniors, Ryan and Reagan Moore. Reagan says the perks of being a twin are, “Having a built-in best friend.” While Ryan stated, “Some perks are just having a friend that’s always there for you and someone to compete against to make yourself better in sports.” Ryan said the best part about his brother is, “I’d say how smart he is and he applies himself before anything else” while Reagan added, “Probably his height.” Both twins said they argue almost every day and Reagan said he wouldn’t change being a twin, while Ryan said “I think I would, of course there’s moments where I wish we weren’t [twins] but he’s always been there for me.” 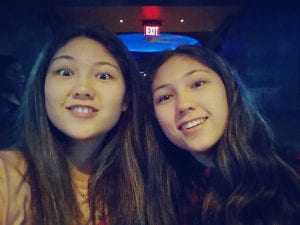 Lastly, Kelly and Kristina Mertz are fraternal twins and juniors this year as well. Kristina said, “There really is no other words to describe the kind of connection we have as twins, she just always gets me. I think the perks are always being able to have someone to believe in you and what you can do, never in my life has Kelly doubted me and she always encourages me to be my best.” Kelly said the perks of being a twin is “For a lot of memberships that require your picture Kristina and I could share a membership like for Six Flags, Sam’s Club, Costco, you know the drill.”  Kristina later said, “The best thing about Kelly, is she is very forward and knows what she wants from life. I think, no, I know, she is going to go very far in life. She also gives some pretty good hugs when I need it the most.” Kelly wanted to add, “[We’re] always being compared like, which ones the fatter twin, the prettier twin, the smarter twin, the funnier twin, or the nicer twin… being a twin you have to kind of gauge your level of tolerance for it. Most of the time Kristina and I are like, ‘okay this guys a tool’ but sometimes you just can’t handle it and it’s very sad, like sometimes it can really get to you so, a word of advice to anyone please do not compare twins.” Kristina said they fight, “Every day, we could go up to five times a day if we have to, for anybody that knows us, we are either laughing or yelling at each other.”

Thank you to all the wonderful twins we are fortunate to have at PHS!