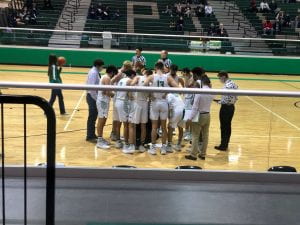 On Friday, November 20th, the Boys Basketball team had their third game against SA Lanier on the home court. The Eagles won the game with a score of 63 to 51. On November 21st, the team traveled to Wimberley, where they played strong but unfortunately fell. They lost with a score of 65-62. November 24th brought yet another loss against YMLA with a score of 76-65. November 28th supplied some good news with a win from Eagle Pass Winn, with the score ending 76-34. Another victory came from Bandera on December 1st, 84-49 a great way to start the month. December 4th came with yet another win from Hondo the score was 76-40. The boys traveled to Del Rio on December 4th and won with an impressive score of 89-67. December 11th at Lulling High School revealed another victory with the Eagles winning at 87-41.

Coach Marquez says, “Overall the boys are playing well for the beginning of the season. We are working hard everyday to improve on the little things. The team is eager to learn and improve daily. We need to improve communication on and off the court and we are always looking to improve our defense, since defense is what we hang our hats on.” He says his goal is, “To get better every day, to do our best during district, and to strive to go far in the playoffs.” He later added, “This team is a hard working team that pushes themselves daily.”

Estevan Jackson, a junior, says, “I think this season is going very well we’re keeping it steady… we are getting comfortable with each other and we’re learning our chemistry with each other, so confidence is one thing we all have.” He then explained, “I hope to improve on being more accurate on shooting and to be able to handle the rock, which means the basketball” and that, “My goal is the same as all of us, to be able to go to play offs and make it to state.” He added, “Oh, Coach Marquez is my favorite coach.”