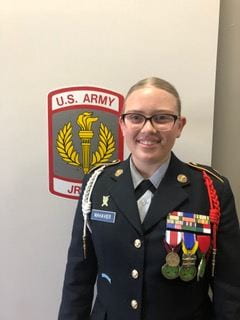 This month, the PHS Journalism class has chosen the confident, enthusiastic, motivated, kind, and determined Ashley Mahavior. She is an active member in JROTC, NHS, and Trinity Baptist Church. For many of the JROTC students, Ashley Mahavior, a junior, is a major role model and idol for the younger cadets.

She has lived in Pleasanton since,“first grade but originally I was a Lady Bear of LaVernia.” She says, “I’m in JROTC. I am in a staff position, which means I control most of the battalion. I’m also on the color guard and armed drill team” Her hobbies include: “Volleyball, tennis, JROTC, hiking, running, writing, training dogs.” Ashley says when she gets out of college, “I want to enlist in either Marines or Air Force and go to college to get a 4-year degree for animal sciences at Tarleton State University then go active in the military. When I’m done with the military, I plan on becoming a veterinarian.” She says that she has many role models. One of them is, “My sister. [She] was in JROTC before I was in high school. She actually brought the color guard to Pleasanton. That is something huge. She ended high school as a captain, and I’m so determined to beat that rank, so I joined, but as I got more into it, I saw that it wasn’t just something you do for fun. It was a family away from your family. It was a sense of comfort to have so many people in the same room as me with the same interest, was comforting.”

Ashley Mahavior is an amazing individual here at Pleasanton who is always kind and caring to the students around here. She will always be remembered in the JROTC community as an incredible student, friend, and leader.