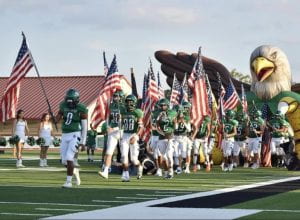 The varsity football team is currently at an overall record of 3-5 and a conference record of 1-2. The Eagles have had their ups and downs throughout the season, but that has only made them stronger and hungrier to win more games and be ready for playoffs. The Eagles took on the Poteet Aggies on Sept 23rd for the Oaken Bucket. The Aggies started off strong scoring first, but Pleasanton answered with a 76 yard touchdown by Diego Luna. The Eagles defense was spectacular throughout the 2nd and 3rd quarter where they were creating turnovers. Pleasanton scored again when Issac Henrichson scored a 32 yard touchdown and not long after Luna again scored a 45 yard touchdown, and to finish it Michael Castillo had a 22 yard touchdown. All touchdowns were connected to quarterback Sean Ramos and defense leaders were Joe-Manuel Ortiz, Adrian Garcia, Ricky Alcorta, and Jayce Krauskopf. The Aggies did score once more, but the final score was 28-13 in favor of the Eagles.

The Eagles played Calhoun on October 14th, which was their 2nd conference game of the season. The game started off slow for the Eagles with Calhoun scoring 19 points, but the Eagles came back with a 12 yard touchdown by Castillo,  Luna followed with another touchdown, and because of an error Alcorta was allowed to recover the ball and score. The score was now tied and heading into overtime. The Eagles started strong right away with a touchdown by Luna and Calhoun failed at their opportunity to score which helped the Eagles win 25-19.

On October 21st, the varsity team played the La Vernia Bears in their 3rd conference game. The Bears were the only team to score in the first half and were up 14-0. By the second half the Eagles were out of their slump and back in the game with a touchdown by Michael Castillo. Chance Hehman then intercepted the Bears ball and Ramos scored a touchdown. The Bears then unfortunately scored again making the final score 21-14.

The Varsity team will need to win another conference game to earn their spot in the playoffs and will have the opportunity this Friday when they play Floresville. “Our team needs to work the most on focusing on the little things in order to do big things,” said senior Giancarlo Garcia. If you can, go support your varsity eagle football team and cheer them on from the sidelines. Pride! Pride!