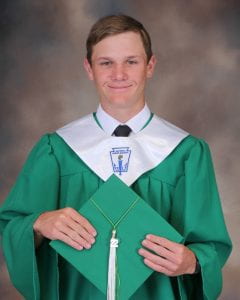 Montgomery Cain, a student who lives by his motto of “never doing anything halfway,” and, “ if he is gonna do it, he’s gonna do it right.” Montgomery, who goes by “Monty,” is known around campus for his hard work and determination. Over the last 4 years, Monty has worked incredibly hard in all of his classes to keep his grades up and earn the title of Valedictorian of the graduating class of 2022.

Montgomery is planning on attending Texas Tech University to study finance with a concentration in real estate. “Both my parents are Red Raiders, so I’ve kinda been raised as a Red Raider,” stated Montgomery. He looks forward to learning how to properly run a business and manage money, which is not only important in business but in life as well. “I love Lubbock, it’s a big town with everything you need in it, but it still feels like a small town. I’ve got a lot of friends up there, good connections, and it’s gonna give me a quality degree that I’m gonna be able to use and be able to make a living off of,” he says.

One of the most prosperous things Montgomery lives by is the quote, “It’s not what you know, it’s who you know.” The ability to network among people and talk comfortably among others is one of the hardest traits to have. For Monty, it all comes naturally. “Being able to communicate with people is a huge part of not only just business but everything in life. I can’t tell you how many people I’ve talked to. If you’re diverse in a lot of fields, you’re able to relate with all kinds of different people and learn from them,” he says.

Montgomery has a drive in him that keeps him going till he’s satisfied, and even then it’s not enough as he sets even higher goals for himself. Outside of his education, Montgomery is in the process of earning his private pilot license. He is hoping to get all the way up to airline transport pilot, which means getting his instrument rating, multi-engine rating, and access to flying helicopters. With these licenses, Montgomery is expanding his future options. He could go into the military and fly fighter jets, he could go with commercial airlines, or he could open a private helicopter business with a focus on ag aviation and wildlife surveys. Recently, he’s invested his time into his newly founded business “T47, LLC.” Named after his grandfathers, the company focuses on custom welding and fabrication. “A lot of people think welding is just putting two pieces of metal together, you run a bead to connect them, and you call it good. But when you’re running it as a business, creating it as a product with your name on it, that represents you and what you believe in. For me, its quality,” stated Montgomery. Along with running a business, Monty competes in competitive shooting sports. In 2021, Montgomery earned himself the title of a 4-H Shotgun National Champion alongside his three other teammates. It’s admirable that he’s been able to find the balance between his education and work outside of school.

Montgomery is a very persistent individual who will grow up and accomplish everything he wants in life, but not without giving credit to those who have helped him along the way. Teachers like Mrs. Bast, Ms. Kelley, and Mr. Townsend have helped pave the way for this phenomenal leader. Mrs. Bast, who has impacted students throughout her years here at PISD, is one of Montgomery’s biggest influencers. “It’s amazing to be in the presence of someone who’s had so much experience of something really unique, like working at NASA. She teaches a hard subject too, not everyone is meant to understand calculus. At some points, I didn’t even understand it. Mrs. Bast made it always feel like it was possible, she always took something that seems really difficult to most people, and it is, and made it doable,” he states. When asked about Montgomery’s character and performance during her class, Mrs. Bast’s response was: “Amazing. Gifted. Willing. I think his thirst for knowledge and understanding is inspiring to teachers and classmates alike.” As someone who is looked up to by not just Montgomery, but the entire graduating class of 2022, Mrs. Bast leaves them with this advice for their future: “Don’t let the climate of the world steal your faith or your hope, or your dreams.”

Alongside the teachers and faculty here at PHS, there are two more very important people who have had a tremendous impact on Montgomery’s life. “Everyone probably says this, but I truly could not have done any of this without my parents’ constant support and guidance,” he states. His parents, who have made it their mission to teach Montgomery every definition of the word “humility” could not be prouder of their son in all that he does. “We are proud of him and grateful for the teachers and others who have inspired him and been part of his journey. Every parent wants happiness for their children. Montgomery has boundless energy and career and life goals. We hope he strives for excellence, pushes through fear, and has fun while realizing his vision for the future. We love him and can’t wait to see what’s next for him,” his mother says. It’s clear to see what a positive impact Montgomery has had growing up, and it’s even better to see him succeeding with that built character.

Montgomery has a bright future ahead of him and judging by his character, he will be determined to keep reaching for higher goals. He leaves his fellow classmates with the advice, “If you reach a goal, don’t stop there and just be complacent with that, keep going. Never limit yourself.” Remember all the hard work you did to get to this point, and keep pushing the limits. To Montgomery, and the rest of the class of 2022, we wish you all the absolute best of luck in all your future endeavors!