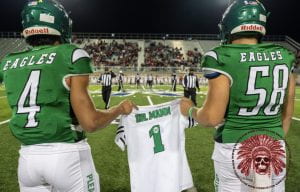 The Pleasanton Eagle Football team traveled to Kerrville on Friday, November 12, to play Lampasas in the first round of play-offs. Both teams fought hard and were tied 7-7 at the end of the first quarter. Wanting to drag on the question of who would win, they proceeded to go into halftime tied 14-14. In the third quarter, Pleasanton decided it was time to kick it up a notch and upped the score 21-14, ensuring their lead in the fourth and final quarter. Lampasas, determined to get their comeback, scored a touchdown with the extra point with 10 minutes left of the fourth quarter, making it tied once again 21-21. With their comeback came a new rush of adrenaline, causing them to score a final touchdown with 3 minutes left in the game. The excitement was too much for their kicker, who missed their extra point but kept them in the lead 27-21. All for dramatics, Pleasanton waited till the final minute of the game to do something spectacular. A pass was completed for a touchdown, along with the extra point with only seconds left to spare. Making it impossible for Lampasas to make a final comeback. The game was close throughout all four quarters, and ended with a final score of 28-27, sending Pleasanton to round two of the playoffs. Setting Lampasas seasonal record to 5 wins and 6 losses, and making ours 8 wins and 3 losses.

On November 18, the Eagles faced off against the Trojans in the second round of playoffs here on our home turf. Pleasanton packed the stands in green and white to show their support for the team. The Eagles ended the first quarter with a lead of 7-0, setting their spirits high for another great game. With 7 minutes left in the second quarter, Jones scored their first touchdown to tie the game with the eagles. Pleasanton, wanting to keep their lead, scored another touchdown. Taking us into halftime with a positive score of 14-7. Ensuring Jones couldn’t make anylast-minute points to come back and beat them, Pleasanton ended the third quarter with another touchdown and extra point, making it 21-7. Taking advantage of Pleasanton’s focus to keep distance between the score, Jones attempted to make a comeback with some final touchdowns but still fell short in the fourth quarter. Once again, the Eagles kept their fans on their toes throughout the game and brought home another win by one point. They beat the Trojans with a final score of 21-20, now upgrading their seasonal record 9-3 for the year, and sending themselves well on their way to round 3.

The eagles, determined to stay ahead of their game, were up bright and early every day during the break practicing for their next game. Game 3 was set to be played on November 26, the day after Thanksgiving against Fredericksburg. Aiming for round four of playoffs, the Eagles ended the first quarter with a lead 6-0. Both teams fought hard during the second quarter and made it entertaining, bringing us into halftime with a score of 14-13 in Fredericksburg’s favor. Third-quarter only continued to benefit Fredericksburg, ending with a score of 18-13. Much like the previous games, Pleasanton attempted a last-minute comeback to win the game and scored a final touchdown. Unfortunately, after a well-fought game, the Eagles fell short 28-20, ending their 2021 season.

This season held great teamwork, sportsmanship, and great positive choices that contributed to the team. We are happy to say our eagle football team had yet another great season this year, and can’t wait to see what next year has in store!