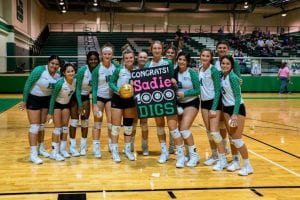 The Pleasanton Girls Volleyball team has been on a roll this year, with many wins and few losses, they are sure to be quick to rise to the top. Starting this month the lady eagles had a district game against Navarro where Pleasanton won 3-0. A few days later on October 8 an away game against Gonzales showed true eagle pride, when the girls won 3-0. The Eagles then won another game 3-0 which was their first district game to be exact, on October 12 against Cuero, which was the start of the 2nd round of District. Unfortunately, on October 15, the Eagles faced their first loss against Lavernia, the ending score was 3-0. Then on October 19 the Lady Eagles travelled to Navaro for a district match where the game was head to head, but they unfortunately lost with a score of 5-2. October 22, however proved to be increasingly successful as the Eagles won with a score of 3-0 against Peiper.

Varsity Volleyball player, Anai Gonzales, a junior states, “I’m really proud of all of our accomplishments so far, and even though District hasn’t gone exactly the way we wanted it to, we’ve still had a good season and I hope to go far in the Playoffs.” She then proceeded to add, “At the beginning, we didn’t exactly have the best connection with each other, but now that we’ve had team bondings… spent time together and have worked together throughout the season, our communication and connection as a team has gotten stronger, and I think that that’s what has taken us so far.”

The Women’s Volleyball team has done wonderful, and they will continue into the future with District and the Playoffs. Pride! Pride!