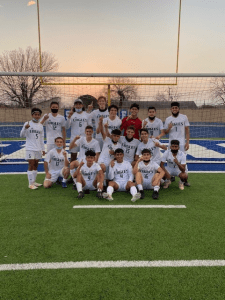 The Men’s Soccer Team kicked off their playoff games on March 25 against Palacios and won 3-2. Five days later, March 30th, the team played against Fredericksburg and sadly lost, 2-4, ending their season. The Men’s Soccer team has had a stressful season. Coach Breiten stated, “I am proud of the team for coming and working together to reach our goal of being district champions. I enjoy coaching all the players, each one of them stands out for their own individual reasons. For next season, I would like to build on our togetherness that we had at the end of this season.”

Congratulations on making District Champions and good luck next season!