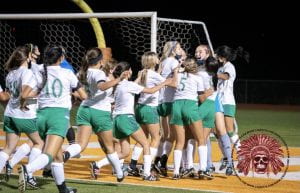 The Pleasanton Women’s Soccer Team celebrating after a win against Beeville in playoffs.

On this team, nobody goes through anything alone. This has been proven by the black armbands worn by the girls every game since to represent the loss of a beautiful woman, Robyn Miller, on March 11. “This team means so much to me and seeing them support my family during such a hard time even if it’s as small as wearing a black armband, it means the world to me,” said Brylee Miller. Instead of letting the situation get the better of them, they took it all out on the field and played with a deep purpose behind it all.

The Pleasanton Women‘s Soccer Team had their first playoff game against Beeville on March 26. After a long battle in both halves, the score was tied 0-0 and the teams went into a shootout. Coach Bird selected Seniors: Renata Osorio, Sofia Rivera, Kaitlyn Garcia, Lacey Stevens, and Junior: Skylar Mitchell.

Renata was up to take the first shot for Pleasanton. Osorio took her shot, but unfortunately, Beeville’s goalie was able to block it. Lucky for us, Renata’s adrenaline rush caused her to shoot the ball before the ref blew his whistle, therefore forcing her to take the shot again. This time she waited a few seconds after the whistle was blown, and sent a beautiful shot to the bottom right of the net. Setting us in the lead 1-0. With Syd set up in goal, Beeville sent in another one of their players to take their second penalty kick of the shootout. She kicked too far right, causing the ball to hit the goal post and bounce back, leaving us in the lead. Up next, we had Kaitlyn step up to the penalty line. She set the score 2-0, increasing our lead. Beeville scored their first goal against us, making the score 2-1. Sofia was determined to keep the team in the playoffs when she scored a great goal and brought us up 3-1. To make an already intense game even better, if Beeville made this next goal in the shootout, they had a chance at a comeback. If they missed, that would set the Eagles at a lead that’s impossible to catch up to. Merecka, after playing an amazing game with multiple saves, was not about to cut her senior season short. Beeville’s player sent a great shot, but not great enough to get past Sydney. She deflected it out, winning Pleasanton the game, and it was only a few seconds before she was in the center of a hype circle her team had formed around her. The fans we’re beyond excited for the Eagles to continue on to round two.

Their next playoff game was against Canyon Lake at Alamo Heights in San Antonio. 15 minutes into the game, Canyon Lake scored their first goal off a corner kick. This didn’t discourage our girls, if anything it just made them fight back harder. With only 8 minutes left in the first half, Osario sent a beautiful through-ball to Brandi Barnett (Junior), who was able to make a quick move around a defender and outrun her to score our first goal of the game. Going into halftime, the game was tied 1-1. This was where Bird decided to change up their plan and told the girls it was time to step up their offensive game. Canyon Lake scored their second goal with only 20 minutes left in the game. After a well-fought battle, with many great runs and plays, The Pleasanton Women’s Soccer Team’s season came to an end. It was an emotional night for this team that’s become a family, many tears were shed as a result of it being many of our senior’s last games of their high school career. “If I had to choose one word to describe this season, I think it would have to be “rollercoaster.” We had a lot of highs and lows but overall it was a ton of fun and I built friendships that I wouldn’t trade for anything,” said Osorio. It’s bittersweet to see them go, but the program is excited to see where future teams take them. “The biggest piece of advice I can give to upcoming classes is to enjoy it all, every single piece of it. It all flies by too fast to just let it float by. Four years’ worth of memories that I will cherish for a long time to come,” said Merecka. The 2020-2021 Pleasanton Women’s Soccer Team has had a memorable year and season, and the program is excited for it to only get better in the future.