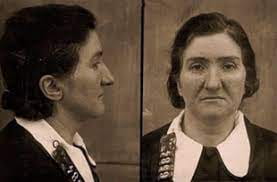 Born in 1894 in Montella, Italy, Leonarda Cianciull lived as an only child to parents, Serafina Marano and Mariano Cinanciull. At the age of twenty-three she married a registry clerk in 1917, but her marriage was against her family’s wishes. Her family hated their relationship so much that her own mother cursed Leonarda and her husband. Some believed that the curse affected Leonarda’s pregnancies since it was reported that she had seventeen: three were miscarriages, while ten of her children died at a very young age. The surviving four were heavily protected by Leonarda. Leonarda said the reason for the over protection was that a gypsy fortune-teller, who many years earlier, had predicted a terrible fate for her: “You will marry and have children, but all your children will die.” Later she got her palm read by another gypsy, who told her, “In your right hand I see prison, in your left a criminal asylum.”

In 1939, Leonarda’s eldest, and most favorable, son was joining the Army. During this time Italy was entering World War II which scared Leonarda because she feared her son would die. So she decided to do the only thing she believed would help: she had to make human sacrifices to save her son’s life. Leonarda, at this time, had three, lonely, middle-aged friends that were in desperate need to get away from their current lives. Each friend asked Leonarda for her help to fix their living situations. They would have never thought a simple call for help would be the most dangerous thing to ask from Leonarda.

Leonarda Cianciulli’s first victim was a local spinster woman named Faustina Setti. Inviting Faustina to her home under the guise of setting her up with a husband in 1939, Cianciulli instructed her to write letters to her family members, telling them that she would be visiting a man she met. But Leonarda drugged Faustina with spiked wine before murdering her with an ax. Leonarda also stole Faustina’s life savings that she had brought along. She then cut Setti into nine pieces, drained all the blood, boiled her body, made it into a mush black mixture and poured the continents into a septic tank.  She then took the blood and made it into “crunchy tea cakes”, which she fed to visitors, her son, as well as herself.

Leonarda’s third victim, Francesca Soavi was invited into her home on Sept. 5, 1940. Just like her first murder, Leonarda convinced Francesca that she had organized a teaching job for her up north of Italy and made her write letters to her friends detailing her trip. Leonarda followed her M.O. and drugged Francesca’s wine, killed her with an ax, baked her into teacakes, and stole her money.

Her last and final victim was a woman named Virginia Cacioppo. Virginia was a noted soprano who once sang at the famed La Scala opera house in Milan. Leonarda had promised her a job working with an impresario in Florence, which prompted Virginia to pay her a visit on Sept. 30, 1940. As with her previous two victims, Leonarda fed Virginia spiked wine and killed her with an ax. This time, however, she melted her flesh, made soap with it, and gave away her human tea cakes and human bars of soap to the unsuspecting neighbours.

Although Leonarda Cianciulli thought she had committed the perfect murders, she could not have been more wrong. Her first two victims who had few concerned relatives, Virginia had a very worried sister-in-law. She didn’t believe Virginia’s letters detailing her quick departure, and had, in fact, seen her entering Leonarda’s home the night she had “left.” Almost immediately, she reported her sister’s disappearance to the Reggio Emilia police, who quickly investigated Leonarda.

At first, Leonarda Cianciulli defended herself. It was only when the police shifted the blame toward her beloved son Giuseppe that she finally broke down and admitted to everything. Leonarda’s trial lasted only a few days. She was found guilty of her crimes and granted a 33-year sentence that echoed the Romani woman’s prophecy with eerie accuracy: 30 years in a prison and three years in a criminal asylum.

On Oct. 15, 1970, Leonarda Cianciulli died of cerebral apoplexy, a type of hemorrhage, while she was still in the asylum. She was 79 years old.