By: Ariana Johnson and Dillon Myers 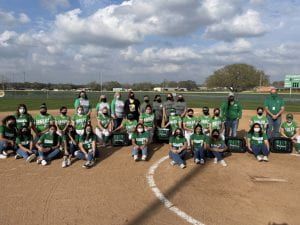 On March 3rd, the JV Lady Eagles Softball Team had their first home game vs Lee Volunteers they went in with a strong beginning but the Volunteers won the game with a score of 14-9. Emery Gillespie said, “For us to get better as a team.” She also said, “Since I am a catcher, I want to get better at blocking balls.” She also said, “I don’t give up because I know we can win and can get better.” On March 6th, the JV Lady Eagles Softball Team went to Poteet High School. They fought hard but Poteet won the game with a score of 15-7. Coach Mireles said, “I try to teach girls to be better than they were the day before whether it was with school or athletics and just try to be a better person than you were the day before.” She also said, “I played since I was 5 and it was always a game that let me let go of the world and escape reality and so then it was a game that I love and I want to teach them to be a better women in the world and better people in the world and not just teach them the love of the game.” On March 10th, The Lady Softball Team went to Gonzales High School. Since the Apaches scored their runs due to numerous walks. The Apaches won 15-0.