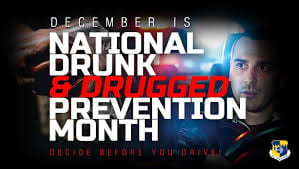 Every year during the month of December over 800 people have died due to drunk/drugged driving. In 2018 it was reported that there were 839 deaths due to drunk driving. Most of the crashes are on December 24th and December 31st. The month of December is the  time of the year where drunk and drugged driving is the most severe. While driving your vehicle you need to be aware of your surroundings, just because you aren’t the one drinking and driving does not mean there aren’t others out there on the road.

There are many different options to take instead of drinking and driving, you can call a taxi, an uber, a friend, and even a parent to come pick you up. Don’t be the person that ruins a family’s life because you chose to drive while intoxicated. The numbers of deaths daily due to drunk driving are tremendous. There are 29 deaths every day due to driving while under the influence. There is one death every 50 minutes every day.

Drunk/drugged driving is not only harming yourself and others, but it is also a huge crime. If you are caught driving under the influence then you can get something called a “DUI” (driving while intoxicated) or an “OUI” (driving under the influence). These consequences stay on your record your entire life, after getting caught it is very hard to get a job or even get into college. You can also get your license revoked, license suspension, fines, fees, ignition interlock device (IID) installation, and even jail time.

The month of December is supposed to be the time for family and friends, don’t ruin that happiness by making a wrong choice. So remember before you chose to get in your car and drive home while under the influence, remember the families and people you are going to harm. Call a friend or even call a family member, just do the right thing.