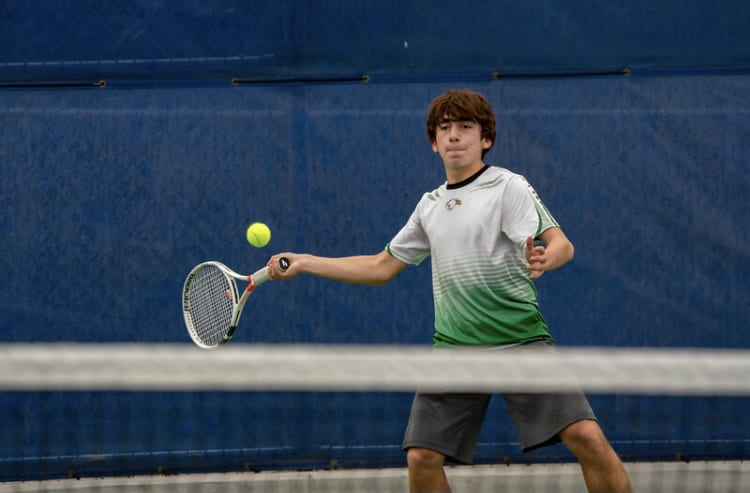 Senior Luke Harlos ready to swing against Boerne on October 27, 2020.

The Eagles’ varsity tennis team had a tournament against the La Vernia Bears on Wednesday, October 7. “The final result was Pleasanton-2, La Vernia-10,” stated head tennis coach, Coach Schwab. “So, we did lose, but that’s not to say because [of] lack of talent…” The team has been working hard all season to stay on top of their opponents, but it has proven to be a challenge with new COVID safe regulations. “It’s changed everything we do. The way we practice, the way we play, we have to haul our own water in now,” said Schwab.

The team has suffered a few losses throughout the season. Senior Cade Macmanus said that they are “losing to teams we usually beat.” He also stated that the upcoming district games would be difficult. Fellow senior Luke Harlos also chimed in to say, “It’s not going very good, but… we’re going to bounce back and become better.” The Eagles were one day away from playing the Devine Warhorses/ Arabians, but according to junior Luke Raney, the team was “pretty prepared, because of practice.”

The team ended up losing to Devine, 10-1 with the only win coming from freshman Mackenzie Richter. “Devine’s a powerhouse,” stated Coach Schwab. “If we beat Gonzales, we secure fourth place, and we already know that fourth place will be playing Boerne on Tuesday at Somerset.”

The Eagles ended up beating the Gonzales Apaches 10-0 on Wednesday, October 21 to play the Boerne Greyhounds in a post-district match on Tuesday, October 27 at 2:30 pm. “It was a good victory that put us into fourth place,” Schwab said. “Everybody played really well… and maybe we’ll give Boerne a run for their money.”

The results from the matches against Boerne still have not been released, but, to quote Coach Schawb, “Pride Pride!”