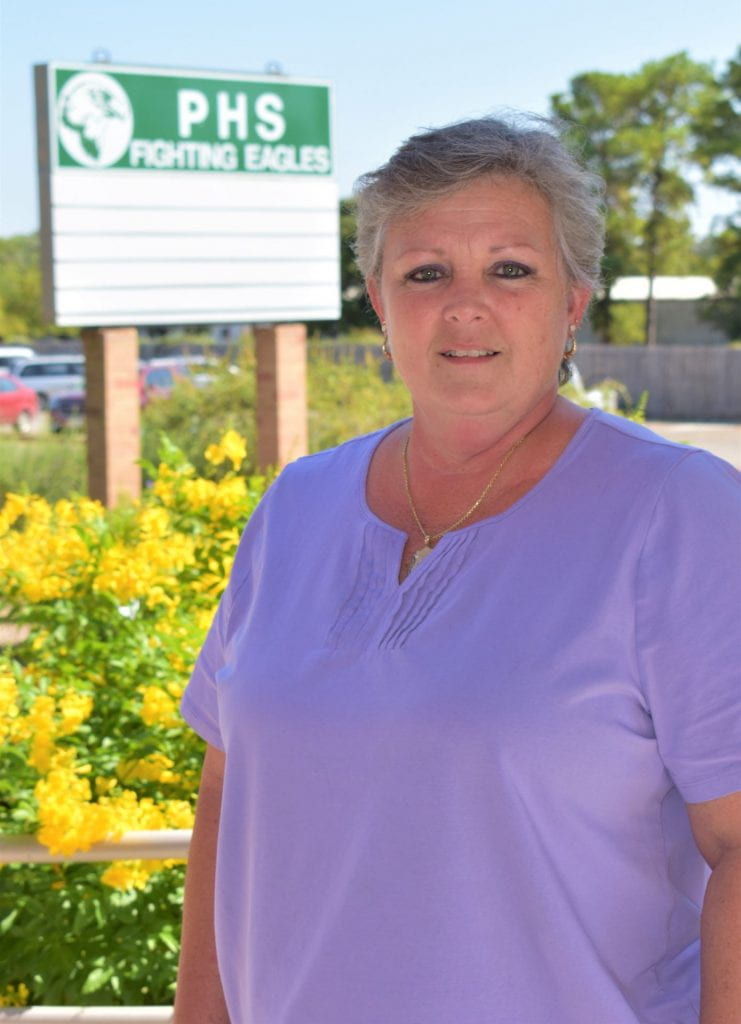 Mrs. Higginbotham is such an important member of our high school team and has been an incredible partner for Mrs. Guajardo. She graduated from John F. Kennedy High School in San Antonio in 1989, where she was in the career prep program. She worked part time at American Federation of Government Employees as a secretary for the labor union of civil service employees at Kelly AFB. After graduation, she was hired full-time and worked there until 1996.

She married her husband in 1991.  Together, they have two sons.  Her family moved to Jourdanton in 2002, seeking small-town life. She began as a substitute teacher in 2004 and worked part-time for the Education Service Center Region 20. I was hired full time by ESC Region 20 in 2008 as a secretary. In 2010, she was hired by Pleasanton ISD as the Curriculum Secretary.

She became Mrs. Guajardo’s secretary in January 2015 when Mrs. Guajardo became the principal at Pleasanton High School.  Mrs. Higginbotham states, “she [Mrs. Guajardo] calls me the “Building Secretary” instead of the Principal’s Secretary.”

She manages the front office staff, Mrs. Guajardo’s calendar, phone calls, hundreds of emails, and the entire high school budget with such ease. “I handle a great deal of ‘behind the scenes’ details”. She provides support to the assistant principals, office staff, teachers and paraprofessionals (including but not limited to absence requests and scheduling substitutes), custodians, and even steps in for the nurse on occasion.  She submits work orders for repairs and maintenance and is sometimes able to fix things herself, saying, “I have a toolbox under my desk.” It comes as no surprise as anyone can see that she wears many hats.

Mrs. Higginbotham coordinates facility requests outside of school hours and manages the high school activities calendar to coordinate with extracurricular activities.  She assists with prom, academic awards night and graduation by purchasing items and scheduling security, the sound system, and stage. She designs the layout and prints the programs handed out for NHS inductions, academic awards night, and graduation.  Our bell system that runs like clockwork?  We can thank Mrs. Higginbotham for that as well.  She even manages our very own Mrs. Guajardo.

Mrs. Guajardo says she is able to effectively do her job because she is reliable, trustworthy, smart, and very professional. Mrs. Guajardo states, “I don’t know what I’d do without her, and I’m honored she’s my partner.” Thank you, Mrs. Higginbotham, for all the hard work you have done for the school and Mrs. Guajardo.  It is clear that you keep PHS running with ease!