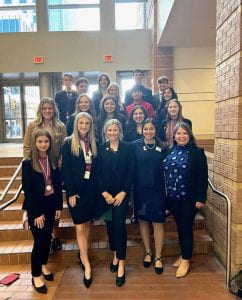 On March 3, the Pleasanton BPA organization made their way to Fort Worth, Texas, to compete in the State Leadership Convention. On day one of the competition, at the special recognition awards ceremony, Brandi Barnett, Addy Brymer, Courtney Henson, and Ashlyn Vera earned their Statesman Torch Award. At this same ceremony Brandi Barnett was chosen as one of the pin design winners. Her pin will be traded at the National Leadership Convention in May.

Congratulation to the BPA competitors and good luck as you attend nationals. Pride! Pride!