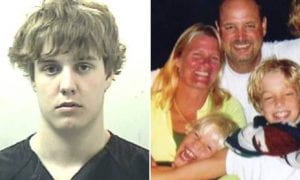 On February 2, 2009 a tragedy was discovered early in the morning. John Browning, 45, along with his wife Tamara, 44, and two young boys, Gregory, 14, and Benjamin, 11, were found dead in their home. Though the community was shocked by such a wicked crime, there was one surviving member of the family who could live to tell the tale.

Nicholas Waggoner Browning was a 15-year-old sophomore who was an honors student attending Dulaney High School. During the time that his family could have been murdered he was away at a friend’s house playing video games. When he finally came home he found the bodies of his beloved family. He then quickly ran outside and urged for his friend’s mom to call 911. The Baltimore County Police Department showed up and immediately secured the scene and questioned Nicholas on what he witnessed. Nicholas opened up and blamed the crime on a robbery gone wrong. Police were suspicious about his story since he had no way of knowing if it was a robbery due to lack of evidence. This is when his story unfolded.

Detectives decided to take Nicholas Browning to the station to further the investigation. Once they began to turn up the heat it only took 6 hours to get the truth out of him. In the videotaped confession, Nicholas Waggoner Browning told investigators that in the early hours of February 2, 2008, he grabbed his father’s gun and shot him in the head while he was sleeping on the couch. He then realized he had already “gone so far” so he continued to murder the rest of his family.

After the murders he walked down a road and tossed the gun in some bushes and walked towards his friends house where he stayed for the rest of the day. Before leaving this friend’s home, Nicholas apparently told both the friends and others that he was going to throw a party that night. When police asked why even murder them in the first place, Nicholas told them that he just wanted the inheritance money. However, police found out that Nicholas actually had a bad relationship with his father. Other students that knew him said he would make jokes about murdering his dad yet no one believed him. They also said Nicholas had a problem following his dad’s rules, which led to many arguments between the two.

Nicholas Waggoner Browning was formally arrested at Baltimore County Police Department around 1 a.m. on February 3, 2008 and charged as an adult with four counts of first degree murder. He pleaded guilty to all charges in January 2009 and was sentenced to four life sentences but will be eligible for parole after serving 23 years with good behavior.