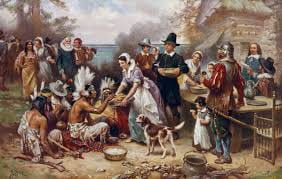 Many people know the origins of Thanksgiving. However, it has been slightly forgotten due to the media industry putting their own twist on it. Here is the true history of this well known holiday:

The American concept of Thanksgiving was developed in the colonies of New England. Its roots can be traced back to the other side of the Atlantic as well. Both the pilgrims who came over on the Mayflower and the Puritans who arrived soon after brought with them a tradition of providential holidays—days of fasting during difficult or pivotal moments and days of feasting and celebration to thank God in times of plenty.

In September 1620, a small ship called the Mayflower left Plymouth, England, carrying 102 passengers—a group of religious separatists seeking a new home where they could practice their faith and others drawn in by the promise of prosperity and land in the New World. After an awful and uncomfortable crossing that lasted 66 days, they dropped anchor near the tip of Cape Cod, far north of their intended destination at the mouth of the Hudson River. One month later, the Mayflower crossed Massachusetts Bay, where the Pilgrims began their work of establishing a village at Plymouth. Through the first brutal winter, most pilgrims stayed on the ship, where they suffered from exposure from the elements and contagious diseases.

In March, the remaining settlers moved to land, where they met an Abenaki Native American who greeted them in English. He came with another native american, Squanto, who was sold into slavery. He taught the pilgrims how to catch fish, cultivate corn, extract tree sap, and eventually helped forge an alliance with the local tribe Wampanoag.

In November of 1621, the Pilgrims’ first corn harvest proved successful. Governor William Bradford called for a celebratory feast and invited a group of the fledgling colony’s Native American allies, including the Wampanoag chief Massasoit. Now remembered as America’s “first Thanksgiving”.