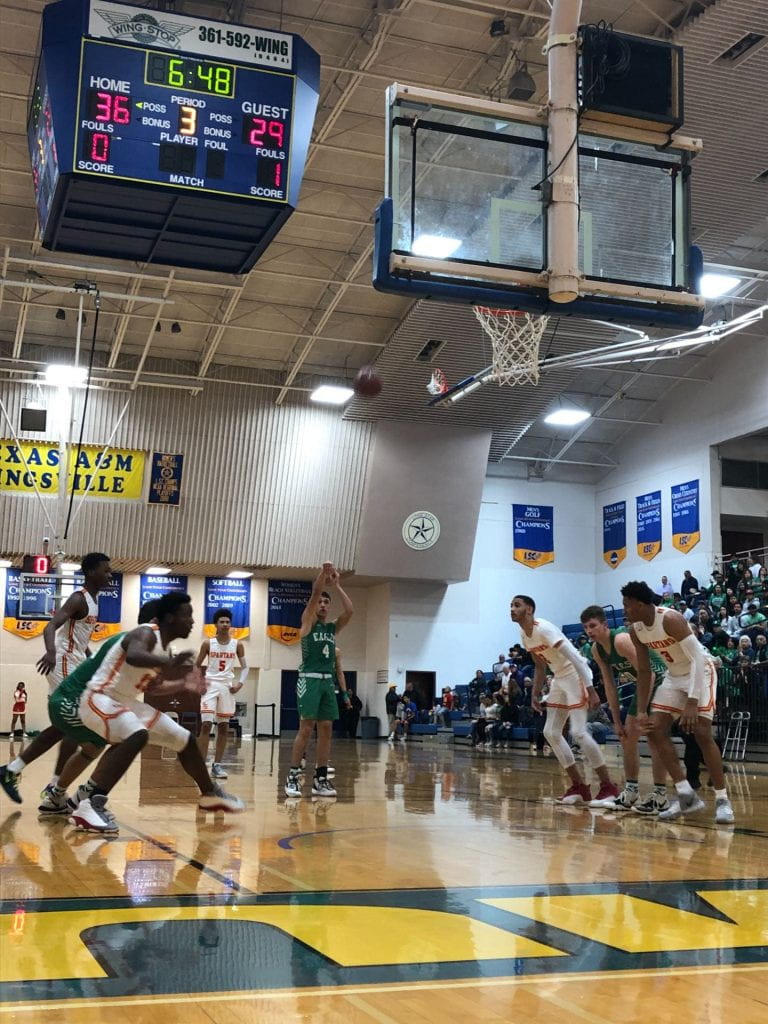 The Pleasanton Eagles kept up the hard work, winning over the Pearsall Mavericks 100-52 on Monday, February 24. “It’s a great feeling, but we’re not ready for it to be over; we’re gonna go as far as we can,” stated senior forward, Dalton Hobbs. The Eagles were led by senior Santiago Arguijo who had a total of 37 points, Dalton Hobbs with 24, and freshman RJ Marquez contributing with 15 points.

The Eagles played the Sinton Pirates on Friday, February 28, defeating them in vengeance from last year’s loss 68-57. “It [winning] feels really good because they took us out in the third round and we wanted revenge and we wanted to get them back,” said senior guard, Santiago Arguijo. Dalton Hobbs led the Eagles in scoring with 22 points, Santiago Arguijo with 18 and RJ Marquez with 16 points.

The boys went on to play Port Isabel for regional quarterfinalists and made Pleasanton High School history by making it into the regional semi-finals. The Eagles beat the Tarpons 77-47, despite the close calls in the third quarter. “Our transition wore them [the Tarpons] out, and we started making shots, and our momentum went up, and the crowd got into it, and it was just a great feeling just to be there,” freshman RJ Marquez said. Senior Santiago Arguijo paved the way for the Eagles with 28 points, with help from fellow senior Dalton Hobbs who had 19 points, and RJ Marquez who helped out with 15.

The Eagles went on to play the Houston Stafford Trojans at the Regional semi-finals at the Regional tournament in Kingsville, Texas. The boys were off to a slow start, falling behind the Trojans at the end of the first quarter 17-8. Pleasanton began picking up the pace in the second quarter, but, unfortunately, so did Stafford. The Eagles fought hard to build up momentum and started the half time behind the Trojans by 10 points, 34-24. The third quarter brought upon its own set of challenges as the Eagles and Trojans scored back to back to take the lead. Pleasanton got a few good shots up, however, Stafford fought all attempts at letting the Eagles take the lead, completing the period 50-36. The fourth quarter gave the Eagles the chance to catch up and defeat the Trojans, and everyone could tell Pleasanton was determined to bounce back. Sadly, the Eagles’ basketball came to an end on that Friday, with the boys losing by four points, 58-54. Santiago Arguijo led the Eagles with 24 points, Dalton Hobbs had 12 points, Kade Leoffler assisted with 6 points, Juan Lopez and Jayce Krauskopf each had 5 points, and RJ Marquez added 3 more points to that.

For those interested in the basketball finals, UIL recently released a statement speaking about the cancellation of spring sports and any State tournaments that were to happen within the duration of the school year. Hopefully, next year the Eagles will continue on their road to State and making history. Pride Pride!