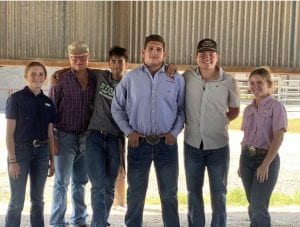 Our FFA chapter has had a strong start to their season as they began with fall Career Development Events (CDE’s). The first contest our students attended was the Area X Multi-District Fall CDE’s contest for their district competition on September 28. Kinsley Barker represented the Homesite Team and took home 1st place. The Land team also took home a 1st place win with Victoria Urbanczyk leading the team, coming in 2nd, then Saide McAda- 3rd, Blair Warden- 6th, William Turner- 8th, Jerry Chessher- 9th, and Corgin King- 10th. The Plant ID also did great, getting 2nd place overall with Brady Stevens leading Pleasanton with a 3rd place finish, followed by Paige Read- 9th, Carlos Cruz- 10th, McAda Rutherford- 11th, Chloe Nieschwitz- 12th, and Mark Thornton- 24th. Finally, the Range team finished 4th overall as a team with Rene Castillo being first for Pleasanton in 18th, followed by Austin Dinscore- 19th, Evelynn Caraway- 23rd, Matthew Guedea- 27th, and Wyatt Tom- 33rd. All of the teams advanced to area.
Their second competition took place at Hondo in preparation for area. The Homesite team got 6th place with Kinsley Barker coming in 24th and Kendal Crouch coming in 31st. The Land team got 6th place as well with Texas Townsend coming in 15th and first for Pleasanton. He was followed by Jerry Chessher- 27th, Blair Warden- 31st, Ashton Barker- 37th, and Corgin King- 46th. Carlos Cruz represented the Plant ID team, coming in 17th and Rene Castillo represented the Range team, coming in 32nd.
The FFA teams’ third contest was area. The Homesite team finished off their season with a team placing 10th place. Kinsley Barker finished 24th which was first for Pleasanton, followed by Presley Crouch- 34th, Kendal Crouch- 61st, and Baile Saenz- 66th. Land had an excellent performance and came in 2nd place overall as a team. Texas Townsend came in 1st place for Pleasanton and 1st overall in the contest. Following Texas was Sadie McAda- 3rd, Victoria Urbanczyk- 21st, and William Turner- 31st. Plant ID also did great, coming in 3rd overall. Paige Read came in 1st for Pleasanton and 4th overall. Following Paige was Brady Stevens- 6th, Carlos Cruz- 8th, and McAda Rutherford- 13th. The Range team had a great performance as well and got 6th overall as a team. Austin Dinscore came in 16th place, followed by Rene Castillo- 19th, Evelynn Caraway- 21st, and Matthew Guedea- 37th. As a result of this contest, the Land, Plant ID, and Range teams all qualified for state.
We interviewed Evelynn Caraway who is a member of the Range team and is also the president of the Pleasanton FFA chapter. Evelynn said that she chose this contest because, “It is really interesting to me and I get to learn a lot of new things about plants and other related things in the process.” Evelynn also likes to be a very active member in the FFA community and tries to get involved in every way she can. We also interviewed Mr. Stubenthal who is the agriculture teacher in charge of leading the Range team. When asked about his thoughts on the progress of his team, Mr. Stubenthal said that, “I have seen a lot of improvement. I see that they are starting to be able to identify the plants. We still have a lot of work to do identifying some of the characteristics though. . . . I’m excited, I guess that’s what I could say about the progress.” Mr. Stubenthal has high hopes for his team and is excited for the spring when the contest picks back up again.
All of these FFA members did an outstanding job and put in a lot of work to get to where they are now in their contest. We wish all the qualifying team the best of luck as they advance on to the state contest in the spring.