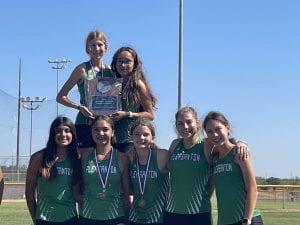 On October 5th, the Pleasanton Cross Country teams competed at the Devine Invitational. Our varsity girls started off strong and brought home first place as a team. Kassidy Vickers, the lady eagles top runner came in 2nd place with a time of 13:09 followed by Shaylynn Gutierez with a time of 13:55 placing 6th place earning them both a medal. Following Kassidy and Shaylynn would be Aryana Partida (14:16 in 11th place), Isabela Osorio (14:22 in 13th place), and Evalynn Garza (14:27 in 14th place). Kara Medina (14:57 in 16th place), Lilly Krause (15:09 in 19th place), Jauslynn Ramirez (15:13 in 22nd place), Shanna Hime (15:13 in 23rd place), and Mallory Fey ( 15:48 in 28th place) would be the final members of the team to cross the finish line for the Varsity girls team.

On Oct 12th, both teams competed at Floresville High School for the District 29-AAAA meet. “Our goals for the season were to all do well at district and become district champs, and hopefully the next step will be regionals followed by state,” said Coach Foster. The varsity girls accomplished their first goal when they won 1st place with 39 points and were given the title of District Champs. Kassidy Vickers placed 1st and was named our District Champ helping advance our team to regionals. Shalyn Guitierrez placed 4th with a time of 12:26, followed by Shanna Hime who placed 9th (12:53), and Aryanna Partida who placed 10th (12:58). Evalynn Garza (13:13) and Kara Medina (13:51) were also contributors to the Lady Eagles victory.

“The amount of work they’ve put in towards running, hundreds of miles a month, they’re a different type of breed,” said Coach Foster. The varsity girls and boys team both competed at the UIL Regional IV meet on Oct 24th and you can find the results in our next month’s edition of the quill. Good luck to our cross country teams as they continue to run their hearts out and compete at the next level. Pride! Pride!