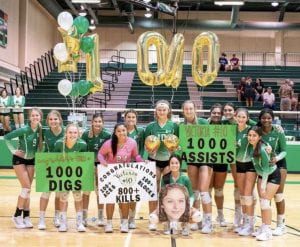 The Varsity Volleyball team has been on fire since the start of the season, and they are currently at a record of 27-1. After losing their first game of the season to Johnson City in 3 sets, the Lady Eagles regrouped and came out focused and ready for their next game against Poth, coming out with a victory of 3-1. After only one game, the team found their groove and maintained it throughout the games that followed. On Aug 11-13th, the Lady Eagles won the Edgewood Tournament, placing 1st for the second year in a row. Kiley Wiechring and Madelyn Estrada made the all-tournament team, Victoria Urbanczyk was Offensive MVP, and Sadie McAda was named MVP of the tournament. On Aug. 16th the Lady Eagles played Southside and beat them 3-1. The following Thursday was the start of the Devine Tournament and our team played every game without losing a set. The championship game was against the host of the tournament, the Devine Arabians, and the Lady Eagles came out strong and beat the Arabians in 2 sets leaving the score at  2-0. Victoria Urbanczyk and Angel Tucker made the all-tournament team and Sadie Mcada was MVP of the tournament.

On Aug 24th the team played YWLA and won 3-0, and started the Southwest tournament that Thursday. The team went undefeated throughout the tournament while playing some good competition and played the host, Southwest, in an intense match that the Lady Eagles fought in ‘till the end and won 2-1. Grace Keylich and Victoria Urbanczyk made the all-tournament team and for the 3rd time this season, Sadie Mcada was named tournament MVP. On Aug 30th, the girls were back on the road to play Randolph and came out with another win of 3-0, then played Fox Tech on Sept 3rd and won 3-0, keeping their winning streak alive. Their last non-district game before district was against D’hanis and the girls did start to struggle throughout the game, but quickly pulled themselves together and won the game 3-1. On Sept 9th, the Lady Eagles played their first district game against Carrizo Springs and with ease won the game with a score of 3-0 to start district off strong. On Sept 13th, the team had a day off from district and played John Jay in a very hard-fought game. After the girls lost their first set, they stayed focused and won the next 3 sets to beat them 3-1. On Friday, September 16th, the Lady Eagles had their 2nd district game of the season against one of their toughest opponents, the Devine Arabians. While the girls did beat them in the Devine Tournament, they still had to stay focused and come out strong to make sure they got the win.

We decided to spotlight the freshman team, this issue, and we met with the new freshman Coach, Coach Townsend, on September 8th to hear what she had to say about the freshman team’s progress this season. She began to tell us that her goal for this season was to get her athletes to be focused and play with each other. “I don’t care how many games we win, as long as we work together as a team.” Which she continued to say was also one of their biggest obstacles and that she has some team-building ideas to help work on that. As district play starts we want to wish all three teams good luck in the future and if you have time to catch a game and support, they would gladly appreciate that. Pride! Pride!