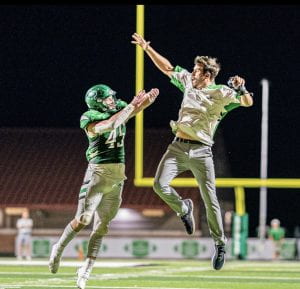 A Challenging Start to the 2023 Eagle Football Season!

As everyone is settling into the new school year, the Eagles are getting up and ready to take on the new season! Over the summer, they had their football camp, where they got to know the freshman athletes and get prepared for the upcoming season.

Before the first game of the season, we had the opportunity to interview a senior athlete, Diego Luna, and Coach Arevalo. Diego Luna shared his thoughts on the upcoming season, “I feel like we’ll do good this year, and when we face other good teams we’ll have good battles.”

The Eagles had their first game at home on August 26th against Antonion. The Eagles gave it their all, but unfortunately lost 27-13. The Eagles played Boerne for their first away game, the defending district champs, and it was a tough battle, ending in a loss 41-7. The following game was against Jourdanton, a long-time rival, and they were determined not to go down without a fight. The Eagles went into 5 overtimes, barely losing 27-25. Coach Arevalo had great advice, “[The] Number one[thing to do] is to stay calm. Getting out of hand mentally will never enhance the particular moment you are in. I like to stay composed so I can best be prepared to analyze the situation.” On the 16th, the Eagles played Gonzales and secured their first win of the season 37-14.

The Eagles started off rough, but that just gave them more resolve to play harder and to push. We are looking forward to what the Eagles will do next! Pride, Pride!