By: River Reyes and Alexandra Garcia 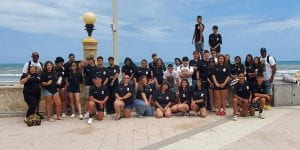 The Pleasanton JROTC Eagle Battalion was invited to the Army JROTC Nationals Drill competition in Daytona Beach, Florida. The drill competition was on Thursday, April 14th at the Ocean Center with a total of 40 schools from across the nation. The teams from Pleasanton included the armed and unarmed drill teams performing in inspection, regulation, and exhibition. Our male and female color guard teams performed for the color guard phase.

Leading up to the competition, the drill and color guard teams spent 3 months practicing and refining their routines to have a competitive performance the day of nationals. There were many afternoon practices and the day before the trip to Florida, April 12th, there was a whole day spent practicing from the first school bell to the last. 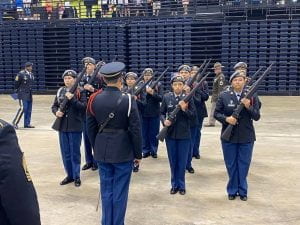 The trip to Daytona Beach was four days long from Wednesday April 13th till Saturday April 16th. For many cadets, this was their first experience flying, adding to the intensity that came with the pressure from Nationals. The first day was spent traveling and getting settled in the hotel at Fairfield in and Suites next to the Daytona International Speedway. The day of the competition, all cadets were ordered to be up and ready to leave by 06:30 as the unarmed exhibition was slated to perform early that morning. Following the unarmed exhibition, the unarmed regulation and inspection phases were carried out in the first half of the day, whereas the armed drill team would be split across three different time periods throughout the day, beginning in the morning, going after lunch, and finishing in the evening. The color guard was swift in their performances finishing before lunchtime.

Army JROTC Nationals for Drill is a very intense and competitive competition. The Eagle Battalion was honored to have been invited and looks forward to competing again in the coming years, refining their performances so that we can earn top placings on the national level. It was a great experience for all the cadets in attendance and they will continue to be prepared for success as they learn and experience more in the JROTC program.